Converting mines to vines for peace

The social impact hero speaks of her journey to redeem war-torn territories with sustainable agriculture that is also providing livelihoods
22.06.2021
An interview with
Heidi KühnFounder and CEO of Roots of Peace

Heidi Kühn with an Afghan farmer in the Shomali Plain, just north of Kabul in Afghanistan. Photo by Roots of Peace.

We know about war-ravaged countries and societies, and the news we have is largely around war and devastation. Very rarely do we hear of truce, and almost never do we hear of peace and prosperity in these locations. But there is good work happening, providing a glimmer of hope where it is the hardest to find.

We speak with Heidi Kühn, CEO of Roots of Peace, whose lifelong mission is to eradicate fields of landmines and replace them with agricultural projects that bring families in war-torn regions relief from conflict and a way out of poverty. Heidi and her team have removed over 100,000 landmines and unexploded ordnances and helped over a million farmers and their families in countries such as Afghanistan, Angola, Bosnia-Herzegovina, Cambodia, Croatia, Iraq, Israel, Palestine and Vietnam.

Unravel: Mines to Vines looks to replace “the scourge of landmines with sustainable agricultural farmland”. How did this idea come about?

Heidi Kuhn: On 21 September 1997, following the tragic death of the late Princess Diana, the vision of turning Mines to Vines was launched at our family home in California and was embraced by over 100 attendees. The concept of replacing minefields with sustainable agricultural farmland is a tribute to the efforts of late Princess Diana to raise global landmine awareness. It is estimated that there are 60 million landmines silently poised in 60 countries.

A few weeks later, the Nobel Peace Prize was awarded to the ICBL (International Campaign to Ban Landmines) and those I had hosted in our living room were now Nobel Peace Prize Laureates. In December 1997, I approached legendary Napa Valley/California vintners Robert Mondavi, Tor Kenward/Beringer and Eric Wente to join me to witness the signing of the Ottawa Treaty to Ban Landmines. While the US had not signed this historic treaty, we attended on behalf of farmers who harvest crops on minefields with the fear of losing life or limb. Our journey is to raise global awareness to turn ‘Mines to Vines’ and ‘Swords to Plowshares’ in a humanitarian effort to eradicate landmines worldwide.

Unravel: Tell us about your first such project. When was it, and what were the challenges you faced?

Ms Kuhn: The planting of a landmine only yields a lethal harvest for farmers living on war-torn lands. The concept of replacing seeds of hatred with seeds of love seemed like an organic way to heal the wounds of war. Regardless of the colour of our hand, the faith in our heart, or the politics in our mind, a seed planted will only yield a harvest of hope.

In January 2000, I took my first footsteps in the minefields of Croatia. The Balkan War had laid 1.2 million landmines on former vineyards, and I worked with Croatian born vintner Miljenko ‘Mike’ Grgich, Owner, Grgich Hills Estate in Napa Valley to raise $30,000 to establish our first programme in Dragalic in Croatia. Robert Mondavi had hosted a fundraiser at his vineyard, and the funds were designated towards our initial programme to heal the wounds of war.

Together, we worked to remove landmines in Vukovar, Ilok, Ciste Male, Ciste Velika, Bibijne and Bastica and replace the minefields with thriving vineyards. Today, Croatia is a top international tourist destination partly due to our tireless efforts to turn ‘vision into reality’ by transforming mines to vines.

Unravel: Why agriculture, and not some other economic activity?

Ms Kuhn: The planting of a seed is in sharp contrast to the planting of a landmine. This is a visible way to show the world ‘tangible’ efforts to plant peace through agriculture.  It is a clear ‘before and after’ to see a minefield transformed into thriving farmland for export and trade.

Unravel: How does your organisation work with farmers? What support do you provide?

Ms Kuhn: In September 2001, the US attack triggered global awareness for Afghanistan. My Mines to Vines efforts shifted towards replacing minefields with fresh grapes and raisins, as wine is forbidden in Muslim countries. Yet, the fruit of the grapevine has many purposes—grapes, raisins and wine. It is a matter of choice, and respecting the seeds we have in common, rather than those that separate us among cultures.

Afghanistan is a country which is 80% dependent upon agriculture for jobs, and was once dubbed ‘The Garden of Central Asia’. Roots of Peace received a large donation of $200,000 from Diane Disney Miller, daughter of Walt Disney, to remove landmines in the Shomali Plains located north of Kabul. There are over 70 varieties of grapes in Afghanistan, and our next goal was to replace minefields with grapes such as Shindur Khani, Taifi, Red Globe and others.

India had a fabled trader named the ‘Kabuliwala’ and we sought to restore the ancient trade routes by exporting fresh Afghan grapes, pomegranates, apples, melons, almonds and apricots to new markets in Delhi, Mumbai, Dubai and other regional markets.

Since 2002, Roots of Peace has planted over 5 million fruit trees in all 34 provinces of Afghanistan – impacting over 1 million Afghan farmers and traders.

When we began, the farmers were harvesting crops on burlap sacks at noon beneath the hot sun and dragging their products to local market expecting a meagre profit. Roots of Peace introduced cold storage facilities, corrugated boxes for packing, and air cargo shipment to assure the highest quality of fresh fruits and vegetables into the Indian and UAE markets.

Working with both Afghan farmers and traders, we have doubled and even tripled (in some cases) their income with alternative agricultural crops to poppies.

Unravel: What are some of the biggest challenges faced by your organisation in different countries?

Ms Kuhn: On 28 March 2014, the Roots of Peace compound in Kabul Afghanistan was attacked by the Taliban in a four-hour gun battle. This tragic event made international news in the New York Times and Washington Post. Miraculously, our five expatriates in the home were not killed, as we listened live to this tragedy from California. Tragically, two Afghans were killed as the suicide bomber detonated. It was a defining moment as to whether it had just gotten too dangerous for us to work in Afghanistan.

However, together, we decided to go the distance. We continued our Roots of Peace work with support from USAID/CHAMP programme to market high value crops to new markets. In 2014, agricultural exports averaged $250 million annually. By 2020, we increased these numbers to over $1.2 billion annually. If we had given up, thousands of Afghan farmers and traders would not have benefited from our agricultural exports programme – cultivating ‘peace through agriculture’ and defining the ‘economics of peace.’

Unravel: How supportive of your work have governments been?

Unravel: What will be the repercussions of President Biden’s announcement that all American troops will be withdrawn from Afghanistan by September 11 this year – both from a perspective of the Afghan people and business?

Ms Kuhn: President Biden made a decision to withdrawal all US troops by 9/11. While I cannot control the political landmines, I have the responsibility to coordinate a ‘harvest of hope’ for innocent farmers and families living in Afghanistan today.

Currently, Roots of Peace has over 350 Afghan employees working in remote provinces to cultivate ‘peace through agriculture’ during this upcoming harvest season.

Afghanistan is shaped like a leaf, and the harvest begins this month (June) in Kandahar and Helmand provinces as we prepare to export fresh melons and pomegranates. It is a rolling harvest, and works its’ way up to Ghazni, Wardak and Logar with fresh apples, apricots and almonds. Then, grapes in the Shomali Plains, and cherries in Badhakshan, and saffron in Herat.

Recently, there was a tragic announcement of the death of 10 deminers from The HALO Trust working in Baghlan province to eradicate landmines. In the midst, we are working with Baghlan farmers to harvest fresh grapes and apricots for exports to new markets. Now, it is more important than ever to ‘double down’ on our efforts to ensure sustainable agricultural crops for Afghan farmers and families to prosper.

2021 is the most challenging ‘harvest of hope’ in Afghanistan, as I manage over $75 million in grants to assure exports arrive on a timely manner in supermarkets in India. The concept of ‘supply and demand’ could not be greater, as we strive to bring the world’s best fresh fruits from Afghanistan to India amidst the greatest challenges of COVID-19 and the Taliban attacks. We need the world to join us and ‘step up’ as we run against the wind in Afghanistan. 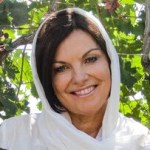 Founder and CEO of Roots of Peace

Heidi Kühn is Founder and CEO of Roots of Peace, a humanitarian-nonprofit organisation founded in September 1997 with a vision to transform Mines to Vines – replacing the scourge of landmines with sustainable agricultural farmland. Her pioneering work empowers families living in war-torn regions with hope leading to the economics of peace through export and trade. Heidi and Roots of Peace have been the recipient of numerous awards including the 2006 Skoll Award for Social Entrepreneurship, the Jacqueline Kennedy Onassis Award/National Jefferson Award for Public Service, the Rotary International “Service Above Self” Award. In 2018, she received the inaugural Earth Ethics Award from Marcus Nobel, nephew of Alfred Nobel presented to her at the United Nations in New York. And, in 2019, Heidi received the Gandhi Global Family Award in New Delhi, the first American to receive this prestigious award.