What have we learned about how China deals with partnerships during the Ukraine crisis?
07.06.2022
Zeno LeoniDefence Studies Department, Lau China Institute, King's College London

China’s worldview rests on the two pillars of “territorial sovereignty” and “non-interference”. Photo by Shutterstock.

This is the final of three pieces, first published by the UK National Committee on China, that examines how China is dealing with its partnerships through the Ukraine crisis.

The last two months mark a dramatic moment in international history. From the standpoint of China’s foreign policy, it has also been an incredibly insightful time. China’s deliberately ambiguous posture on the war in Ukraine will surely become a case study for scholars.

Looking back to 4 February, during the opening ceremony of the Winter Olympics in Beijing, Russia and China promised each other and the world that cooperation would be with “no limits”. Yet, throughout the following weeks, and certainly since the beginning of the territorial invasion of Ukraine by Russia, there has been a mild evolution in Beijing’s posture. The main reason for this adjustment is to be found in China’s worldview. Two pillars of this world-view are “territorial sovereignty” and “non-interference”. Russia’s operations in Ukraine have brought these two concepts into tension with one another.

On the one hand, China could not fail to see in the Ukraine war the violation of sovereignty of a country which, even if it was influenced by NATO, was not a puppet state. On the other hand, China’s respect for “non-interference” prevents Beijing from intervening in a more assertive manner against Russia.

Therefore, during the first weeks of the campaign, Foreign Minister Wang Yi suggested that a middle ground could still be found to respect Ukraine’s sovereignty and accommodate Russia’s security. Xi Jinping had a private conversation with Putin where, in all likelihood, he reiterated Wang’s message. China also abstained during two votes on the current crisis, once in the Security Council and once in the General Assembly.

Yet, in the end China has not joined the West in sanctioning Russia as many had hoped. This was the one action that would have tilted the balance of forces. On the contrary, China has continued to blame NATO and the West for waging wars around the world. This is much to the surprise of the media who could not understand why China has not sanctioned Russia when its economic interests with Europe by far outweigh those with Russia.

What can we infer about China’s foreign policy stance on such a controversial issue?

There are several takeaways, but the overarching theme is that China has political priorities which at times can supersede immediate economic interests.

Within this framework, the most important lesson is that China is currently going through a historical stage of its grand strategic trajectory where it must make “friends”. These friends—whether partners or allies, the substance does not change—are crucial if China wants to project its influence beyond Southeast Asia and Central Asia; to shape multilateral institutions from the inside so as to change the rules of international regimes and standards; and to start building the basis for developing forward basing military capabilities. While prioritising long-term political interests reflects an attitude that some might characterise (or even caricature) as ‘very Chinese’, it is in fact not at all unusual for any country to strive for allies in great power politics.

If one looks at the US, for instance, it is fair to ask what there would be of American hegemony, if it was not for the network of alliances that helps Washington DC project influence quasi-globally? Without Germany, Italy and the UK in Europe, Saudi Arabia and Bahrain in the Gulf, and Australia and Japan in the Pacific, the US would probably be a local power in the Western hemisphere. But, as the Ukrainian crisis clearly shows, China is not on the lookout for friends among the core states of the European Union (EU), despite having commercial relationships with these countries, worth billions of euros. The sort of friends that China will need to build a sphere of influence are to be found in the developing world – among those states that have not wanted to sanction Russia.

For the time being, EU members will continue to argue against China on a political level, and there is little China can do to please them. At the same time, Beijing is confident that the Europeans will not have the guts to impose secondary sanctions on China because they need access to China’s market.

There is, however, another reason why China has not intervened in the conflict and against Russia. At a time when the US, NATO, and the EU have limited or no diplomatic credibility—since they are not impartial in the conflict—many in the West assume that China could be the natural mediator.

They may have discounted two things. At a time of American disengagement from multilateralism, China is not yet ready or interested in taking the lead. Moreover, China may simply not be as shocked and concerned by the war as European countries are. This is a very important point because it signals that current times mark a period of ‘hegemonic vacuum’.

In the short-term, China is not going to act as an international arbiter of disputes among other states in the way the US has done for decades.

More specifically, we should not always assume that in the International System of States (ISS), made up of sovereign national entities, one country can easily influence another country.

Although China is becoming a great power, it might not be enough for Xi Jinping to hold a phone call with Putin to persuade him that the war in Ukraine should be ended. This is just not how sovereign states operate and certainly this is not the case for Russia. Ukraine seems to be a high priority for the Kremlin and it is certainly not a high priority for Chinese leaders in Zhongnanhai. Above all, this might also become dangerous territory for China. Should Beijing insist on mediating but fail to achieve a tangible outcome, it could represent a setback. It might signal that China has limited leverage over its partners, or that its diplomatic influence remains limited to its own region or minor powers alone. Finally, there may be another way to interpret China’s “on the fence” posture. This has to do with betting on the right horse or choosing the lesser evil In Myanmar; China accepted a military coup and the subsequent Tatmadaw junta, because the alternative might have been greater instability. Similarly, China has for years seen North Korea as an inconvenient partner. Ensuring regime stability has been a core interest for Chinese elites. Equally, opposing Russia more confrontationally in Ukraine might have a more destabilising effect than letting the more powerful military side follow its objectives.

So, is China’s patience endless? What could prompt Beijing to intervene? It is likely that as long as this conflict remains local—that is, inside Ukraine’s borders—Beijing will be able to live with it. Yet, should the conflict spill over, China could flex its muscles. China would never accept a scenario of hostilities spreading to the Mediterranean region, for instance, where both NATO and Russia have naval assets facing off each other. If China was to see impacts on the bulk of its trade to Europe, which passes through those waters, the calculus could change. This is not an impossible outcome. A classic example of what might trigger tensions is the missile that struck a Japanese cargo-ship in the Black Sea off the coast of Ukraine. This could shift the geographical centre of gravity of this war. 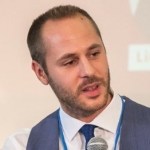 Dr Zeno Leoni is a lecturer in ‘Challenges to the International Order' at the Defence Studies Department of King’s College London, based within the Joint Services and Staff College (JSCSC) of the Defence Academy of the United Kingdom. He is also an affiliate to the Lau China Institute of King's College London, where he is co-convenor of the same institute’s policy brief series named China in the World.