The Great Hall of the People in Beijing, China. China recently outlined it's 14th Five-Year Plan. Photo by Shutterstock.

The outlines of China’s 14th Five-Year Plan (FYP) and its new 15-year vision indicate a move to less rapid but higher quality growth, and continued reform and opening up.

Official statements about growth ambitions indicate that, while growth remains a key objective in the eyes of China’s leadership, targets are likely to be set significantly lower than in the 13th FYP.

The theme of “dual circulation” combines a commitment to continue to reform and open up, with a push for “self-reliance” in technology amid harsher external conditions.

After its 5th Plenum, on 29 October, the Chinese Communist Party (CCP) released its “Proposals for Formulating the 14th Five-Year Plan (FYP) (2021-25)” and the “Long-term Objectives through 2035”, an outline of its vision for development in the coming 15 years.

While the complete FYP will come out until the annual National People’s Congress Meeting, likely in March, more specifics were released on 3 November and in a speech by President Xi Jinping published on 1 November.

A response to external headwinds—especially US attempts to decouple from China—dual circulation is about boosting domestic demand and growth, and ensuring the Chinese economy is robust against shocks, while at the same time continuing to reform and open up further.

In his speech, President Xi said “it is entirely possible to reach high-income country status by current standards by the end of the 14th Five-Year Plan, and to double the total economic output or per capita income by 2035.”

The Plenum aimed for China to be a “medium” developed country in 15 years.

Exhibit: China’s medium and long-term plans feature less ambitious growth targets than in the past 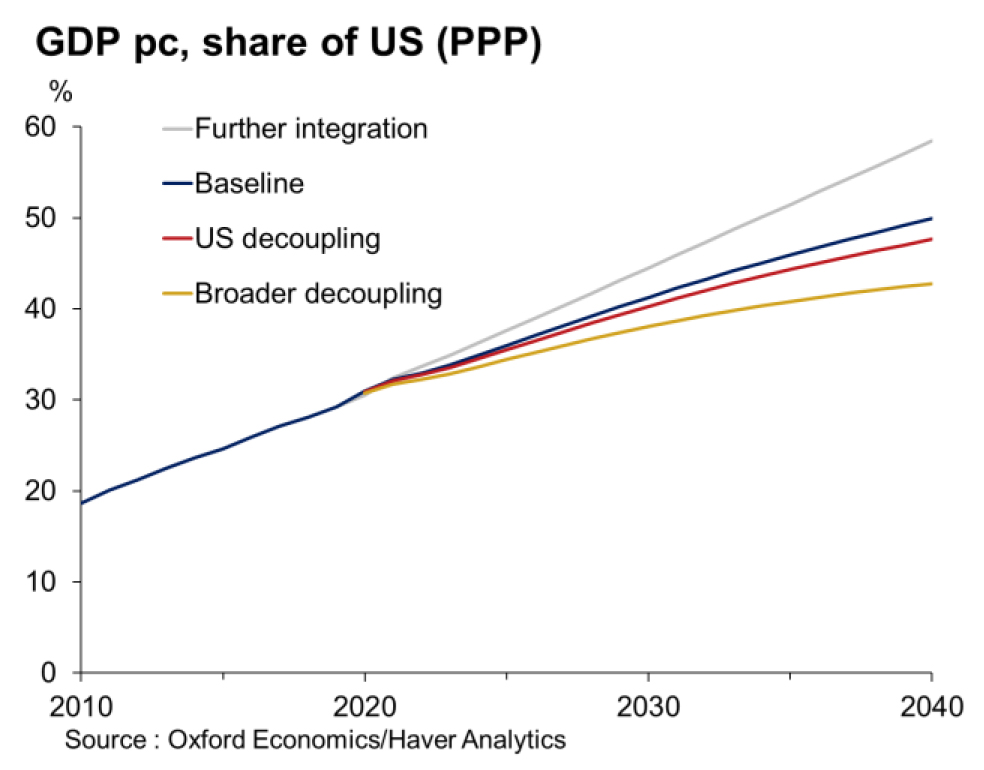 Reaching high-income status by current standards implies a gross national income per capita of $12,536 by 2025, a modest 4% annual growth in $ terms, about half of our forecast on that metric.

In a press conference, Ning Jizhe, deputy head of the National Development and Reform Commission, repeated the familiar phrase “development (as in, growth) is the foundation and key to solving all problems in our country, and the top priority of the party”. It is therefore very likely that China will again have a growth target, despite calls to abandon them (as usual, the 14th FYP’s official GDP growth target won’t be announced until next year).

As we expected, the FYP sees “dual circulation” as the key theme. A response to external headwinds—especially US attempts to decouple from China—dual circulation is about boosting domestic demand and growth, and ensuring the Chinese economy is robust against shocks, while at the same time continuing to reform and open up further.

In that sense, dual circulation in most respects overlaps with the long-running overall objectives to rebalance the pattern of growth towards consumption and the services sector, and improve industrial structure, by moving up the value chain. But recognising harsher external conditions, the FYP has a new focus on “self-reliance” in technology.

We think economic reform in coming years will focus on the Hukou registration system and improving the quality of urbanisation, the rural land system, state-owned enterprises and the financial system. The Plenum called for “significant progress” with reforms of the ownership system and factor markets (of land, capital and labour), and for “speeding up reforms of the financial system and improving the way it serves China’s economy”.

As the US restricts access to its technology, the plan puts a strong emphasis on innovation and technological self-reliance, with the “green economy” and carbon emission controls also areas of focus.

In his speech, President Xi noted that the COVID-19 experience had revealed the downside of high-density cities. This may herald some adjustment of the urbanisation strategy.

As we stressed before, we also expect China to continue to push for further opening up of the economy and the financial system, including via additional progress on welcoming foreign investment and some more unilateral reduction of import tariffs.

A strong focus on innovation and technological self-reliance

In response to the US restricting access to Chinese technology, the proposals focus on technology and innovation more than ever.

The Plenum said “we should insist on the core status of technological innovation in our overall plan of modernisation, and make technological self-reliance the strategic pillar for our national development.” It also called for “autonomous and controllable” supply-chain designs. Self-reliance in semiconductors is seen as particularly crucial, given the current dependence on US-made chip-design tools and patents as well as critical manufacturing technologies from US allies.

In line with the vision for the next 15 years, the long-term document foresees that by “making major breakthroughs in core technologies in key areas, China will become a global leader in innovation”. Emerging fields identified for development include information technology, biotechnology, new energy sources, materials, and new-energy vehicles such as electric ones.

The document also sees “deep integration” of the internet, big data and AI into various industries. While it no longer makes explicit reference to the “Made in China 2025” initiative, China is set to keep pursuing the policies that emanated from this initiative.

The Plenum also stressed the “green economy” and CO2 emission control. In line with the objective to achieve “carbon neutrality” by 2060, the Plenum calls for significant progress with control of carbon emission by 2035 (“to decline after peaking”).

We expect the 14th FYP to target further tightening of the energy and CO2 and SO2 emission targets. The current objective is to obtain 20% of primary energy use from non-fossil fuels by 2030, but policymakers are debating bringing that target forward.

In all, China’s economic objectives and policies are evolving. Growth remains important, but growth ambitions are scaled back as policymakers aim to raise the quality of growth. As the US restricts access to its technology, the plan puts a strong emphasis on innovation and technological self-reliance, with the “green economy” and carbon emission controls also areas of focus.