A view of Rio De Janerio, Brazil. The emerging markets as a group is experiencing its largest GDP contraction on record. Image by LhcCoutinho from Pixabay.

The COVID-19 crisis has been extraordinary, but so have the policy responses.

The emerging markets as a group is experiencing its largest GDP contraction on record. This, coupled with dwindling policy space, is forcing a growing number of emerging market central banks to take recourse to more unorthodox measures.

This is showing up in emerging markets’ central banks’ balance sheets, which have started to expand much more rapidly than they did during the Global Financial Crisis (GFC), driven by both foreign and domestic asset components.

As a result, in March, the losses to foreign investors were amplified by widening local currency sovereign spreads and sharp currency depreciation moving in lockstep.

What was remarkable about the emerging markets central banks’ response to the unprecedented capital flight in March was, that not only did it stave off a financial crisis, it was innovative.

In addition to allowing exchange rate flexibility and drawing on FX reserves when currencies depreciated too sharply, no fewer than 18 emerging markets central banks started sovereign bond purchase programmes, many for the first time. This was implemented under the guise of stabilising bond markets, but for all intents and purposes emerging market central banks have subtly expanded their toolkit to take on the role of dealer of last resort.

In other words, they have followed their developed market counterparts into the realm of quantitative easing and, so far, successfully. That said, apart from China, the resumption of portfolio inflows has been lacklustre. In many large emerging market economies—including India, Indonesia, Mexico, South Africa and Turkey—the absence of strong portfolio debt inflows has left governments more reliant on their central banks to help fill the void of diminished foreign funding of their ballooning fiscal deficits.

We analysed 20 emerging market central bank balance sheets to show how they have grown rapidly this year; strikingly, 10 now have larger balance sheets (scaled by GDP) than the US Fed. Since February 2020, 19 of the 20 central banks have experienced an increase in domestic assets—as a result of buying government and private sector debt—with an average increase of over 4x more than during the GFC. This rapid balance sheet expansion has flooded financial systems with liquidity. 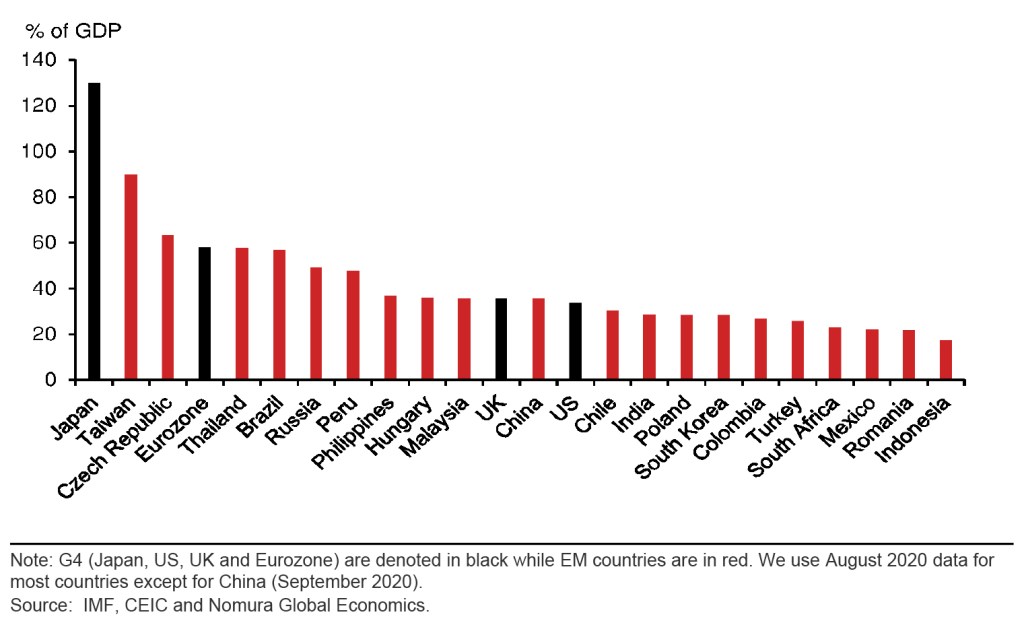 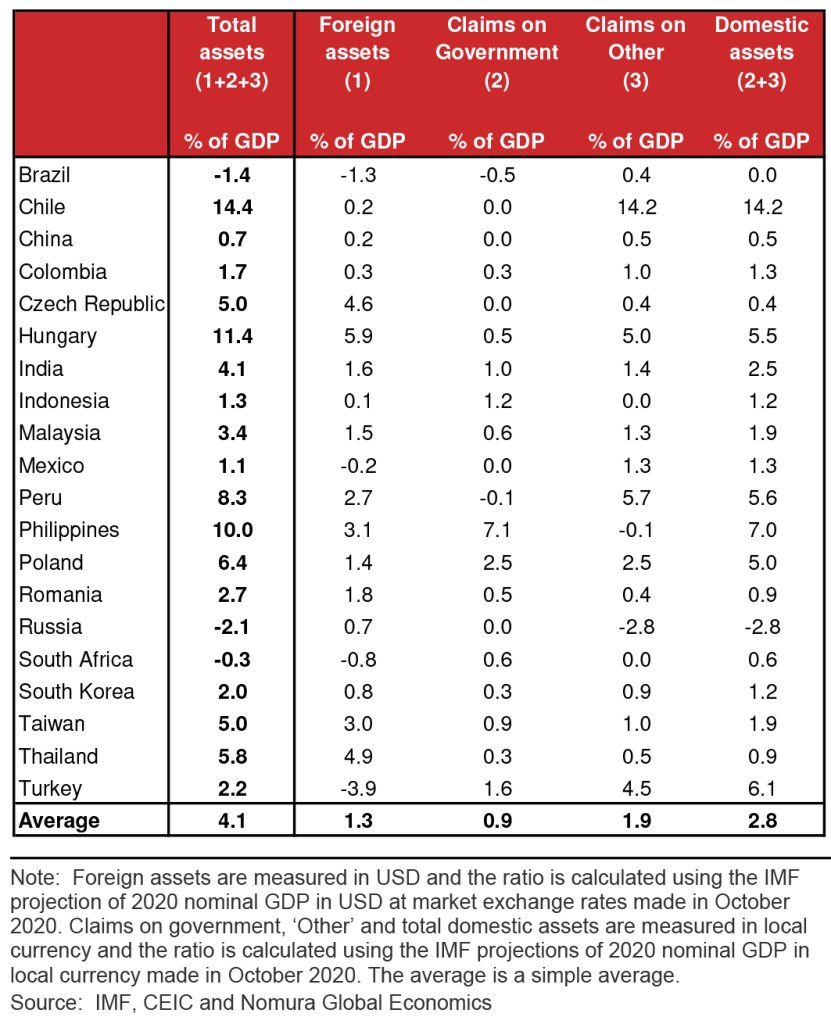 Emerging market central banks venture into quantitative easing is unlikely to be a one-off. As conventional space becomes limited, they will likely consider unconventional monetary policy as a more permanent part of their policy toolkit, at a time when governments are becoming more reliant on them to help ease the financing pressure from ballooning fiscal deficits.

Looking into 2021, one possible scenario is robust capital inflows return across emerging markets, driven by powerful push factors. Additional fiscal stimulus being deployed in the major advanced economies and success on the vaccine front that eases fears of the pandemic could result in the global hunt for yield returning with a vengeance.

While that is a possible outcome, we believe the more likely outcome is foreign investors turning more discriminatory in emerging markets. This crisis has widened the disparities between strong and weak performing emerging market economies, a divide that we think investors will increasingly focus on, as they weigh the risk against returns in an environment with a much narrower interest rate differential between emerging and developed markets, and every country simultaneously increasing debt issuance. This means foreign investors will demand a higher risk premium on emerging markets that are deemed to face dangerously high debt levels and/ or balance of payments vulnerability.

In an environment of intensified foreign investor discrimination, the implications for central bank balance sheets and domestic liquidity become more nuanced. Those emerging markets economies that are on a clear path to recovery and have strong fundamentals could face overwhelming capital inflows, significantly reducing external financing constraints and allowing central banks to cease government bond buying programmes (they were probably not large to start with given the strong economic fundamentals).

As such, central bank domestic assets could stop rising, but this could be more than offset by an increase in central bank foreign assets, as a result of FX intervention to limit excessive currency appreciation. Thus, for an economy with strong fundamentals and intense foreign investor discrimination in its favour, its central bank total assets could continue to grow via foreign assets, and financial system liquidity would remain flush.

At the other extreme, those emerging markets economies that are struggling to recover and have weak fundamentals could face overwhelming capital outflows. This could quickly close the window on external financing, requiring central banks to step in with even larger government bond buying programmes. For some of these emerging markets economies, what was QE by stealth could suddenly become turbo-charged QE, in order to avoid a sharp rise in government bond yields and original sin redux.

Central bank domestic assets would grow at an accelerated rate, but this could be more than offset by the slump in central bank foreign assets, as a result of FX intervention to limit excessive currency depreciation. Therefore, in an environment of intense foreign investor discrimination, and for an economy with weak fundamentals, its central bank total assets could decrease, as the fall in foreign assets exceeds the rise in domestic assets, causing financial system liquidity to evaporate.

This is an abridged version of a larger report published by the Nomura authors, titled “EM QE amid rising investor discrimination”.