While Joe Biden has already committed to reverse President Trump’s decisions to exit the Paris climate accords and the WHO, his policy towards China is unlikely to shift substantially
17.11.2020
Louis KuijsAsia-Pacific Chief Economist at S&P Global

It is unlikely that the US administration under President Biden will ease its policy stance on China in a major way. Photo by Shutterstock.

In the US elections of November 3, Joe Biden won the Presidency. While the make-up of the Senate won’t be certain until Georgia holds its two runoff elections in January, the Republicans are likely to retain control of the Senate, while the Democrats maintain majority in the House of Representatives.

The potential impact of the US presidential election results on China run via the influence on the US economy and US-China relations.

The Republican control of the Senate will substantially constrain the ability of the Biden administration to push through domestic policy changes, in particular the fiscal package that the Democrats had hoped to enact. As a result, we now don’t assume significant fiscal policy easing in 2021 anymore and maintain the “status quo” policy scenario. We still expect a fiscal expansion to be unveiled early next year, but think it is likely to be similar in size to the $1.5 trillion package that is already in our baseline forecast.

Exhibit: No significant shift in the US policy stance vis-à-vis China expected under Mr Biden 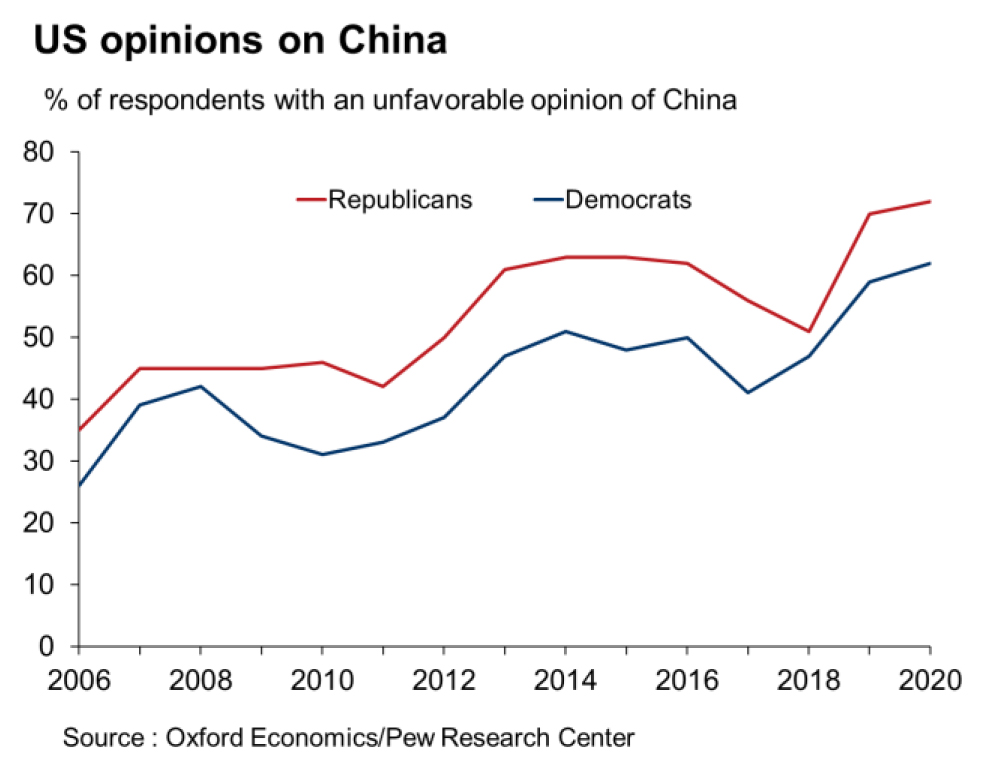 Compared to the reliance on Congressional approval in the case of most domestic policy areas, the US administration holds significant sway over foreign and trade policy. Donald Trump used this authority to pursue his trade war with China and other countries, and withdraw from the Paris agreement and the WHO.

In principle, Mr Biden could roll back many of the trade tariffs and other changes introduced by his predecessor.

We expect the Biden administration to be less aggressive and more predictable in its foreign policy, including vis-à-vis China, which will be a positive development. We would expect a Democratic administration to be more interested in engagement on ‘Global Commons’ issues such as climate change and the COVID-19 pandemic. Indeed, the Biden team has indicated his government will quickly rejoin the Paris agreement and the WHO.

We expect US foreign policy under Mr Biden to be more multilateral, which could make it more likely that a “common front” towards China emerges among developed countries.

With respect to US-China relations, the Trump government’s unpredictable and volatile policymaking created unhelpful uncertainty that weighed on trade and investment decisions. While Mr Biden is not a free trader at heart, we think a government with him at the helm is less likely to use tariffs as a negotiation tactic or to use national security legislation as a basis for raising tariffs or obstructing Chinese companies.

Stance towards China not expected to change anytime soon

However, as we have argued before, we don’t think Mr Biden will ease the US’ policy stance vis-à-vis China on economic issues and technology in a major way. A tough stance on China has broad support across the US political spectrum (Exhibit).

Moreover, Mr Biden’s own pronouncements and policy programme suggest he will continue to try to maintain the US’ technological lead and to attract manufacturing activity.

Some Chinese policy advisors think that China may try to renegotiate the phase 1 trade deal, exchanging a reduction in very challenging import targets for stronger commitments on structural reforms such as better protection for intellectual property protection and further opening up the financial sector. While such a renegotiation would fit with the more strategic, longer-term orientation that a Biden administration is likely to have, we expect Mr Biden to be under strong pressure to maintain a tough stance against China, making significant changes in current policies towards the country unlikely any time soon. Following the hard rhetoric on China during the election campaign, Mr Biden cannot be seen to be “soft” on China. In addition, it is very hard to objectively monitor progress on reform.

We expect the new US administration to conduct a strategic review of the Trump administration’s trade and investment policies. Those considered unhelpful for the US could be the basis for negotiations. But this takes time and, given the large domestic policy agenda, trade issues will not be a high priority. Mr Biden has also indicated that he wants to “make investments in US workers” before agreeing on new trade agreements.

We would expect a Democratic administration to be more interested in engagement on ‘Global Commons’ issues such as climate change and the COVID-19 pandemic.

There are two additional factors shaping the impact of a Biden government on China. We would expect a more forceful and comprehensive stance on issues such as Hong Kong, Taiwan, Xinjiang and the South China Sea than under the Trump administration.

Moreover, we expect US foreign policy under Mr Biden to be more multilateral, which could make it more likely that a “common front” towards China emerges among developed countries. On the economic front, this could lead to a more consistent push for changes in the role of state-owned enterprises (SOEs) in the economy and industrial policy, a level playing field for foreign firms and better protection of intellectual property.