The Bangladesh government's handling of the pandemic has been inadequate, with implications on both public health and the economy
21.08.2020
Mohammad Shahzadul AlamDirector at Reliance Steel Limited

Workers producing clothes at a garment factory in Dhaka, Bangladesh. Although garments factories were allowed to operate during the lockdown, over a million workers were still laid off due to declining and cancelled orders from overseas. Photo by Shutterstock.

The Bangladesh government’s handling of the pandemic has been inadequate, with implications on both public health and the economy

Back in 2014 when the Awami League was re-elected for a second term in Bangladesh with very little opposition, there was political unrest with prolonged strikes and street violence. The government responded by trying to rally the business community to strengthen its position.

In a panel discussion with eminent people from the business community, they were asked what support they needed from the government; an astute and laconic businessman replied: “stability”.

Since then, the Awami League Government has been re-elected for an unprecedented third term, and has, largely, delivered on its promise of stability. Bangladesh has not seen major political unrests or strikes as we are wont to see.

With stability, the economy has benefited. The gross domestic product (GDP) growth rate for fiscal year 2018-2019 was above 8%, and growth in the ongoing year was expected to be even better. And then as this year began, economies around the world started experiencing a crisis like few before it.

The handling of COVID-19

In Bangladesh, the first few cases of COVID-19 were recorded on 8 March. Despite dire warnings from multilateral institutions and NGOs, and with months to prepare, the government was caught unprepared.

There was no pandemic response plan, no clear public communication, no control over borders and no control over the movement of expatriates returning from Italy and China – countries which were at that time riding the peak of the virus’ spread.

The government finally called for a nationwide lockdown from 26 March to 4 April, which was later extended to 30 May, as the number of infections continued to rise unabated. Many observed that Bangladesh closely followed the Indian response. Given Bangladesh’s much smaller population of 164 million as compared to India’s almost 1.4 billion, it initially avoided many of the more widely reported problems faced by India.

In the early stages of the lockdown, the private sector stepped up along with the government in a commendable effort to tackle the crisis. BRAC, an international development organisation, expanded its efforts to protect the urban poor, a section of the population often overlooked by the government. There were many relief distribution drives, organised by individuals and private organisations.

In those early days, there was careful optimism that the country would see out the lockdown, flatten the curve and things would be back to normal once the country emerged from the lockdown.

The effect of the pandemic on the economy was immediate. Many informal workers, comprising 85% of the workforce, lost their livelihoods instantly once the lockdown was implemented. This is a section of workers with zero socio-economic protection of any kind afforded to it by employers and little from the government.

Although garments factories—among the biggest employers in the country—with orders to fulfil were allowed to operate, over a million workers were still laid off due to declining and cancelled orders from overseas. As work slowed, foreign remittances, a major source of foreign currency earnings for the country, dried up too. To put it into perspective, the garments sector contributes 11% to the country’s GDP while remittances contribute 6%. The pandemic dealt a double-blow to the two big contributors of the economy.

In 2019, over 34 million people or 20.5% of Bangladesh’s population were poor, and 17 million, or 10.5%, were extremely poor. The Asian Development Bank (ADB) estimates that the pandemic will drive an additional 13 million people into poverty and cause 3.7 million job cuts in the country.

Having been re-elected with the promise of development, the government did not have the stomach for a prolonged lockdown, and lifted it despite rising levels of infections.

The ADB also estimates that Bangladesh’s GDP growth rate will decline to 3.8% in 2020, from 8.2% in 2019, resulting in the slowest growth rate the country has seen since 2002. And given there are no signs yet of any emergence from this pandemic, the 2020 estimate looks optimistic.

The lockdown, poorly implemented as it was, did not lower the rate of infection as expected.

But having been re-elected with the promise of development, the government did not have the stomach for a prolonged lockdown, and lifted it despite rising levels of infections.

The coronavirus has exposed many vulnerabilities in Bangladesh. Widespread corruption and inefficiencies were widely reported in the healthcare sector and in relief distribution. Corruption is not new to Bangladesh, having plagued it since the birth of the country. However, now with the crippling effects of the coronavirus, departmental inefficiencies and apparent apathy, the damaging effects of corruption are being more widely felt by the people.

There is an obvious lack of coordination between the health ministry, the Directorate General of Health Services (DGHS) and district level health offices, which has severely hindered efforts to contain the spread of the virus.

The government has thus far largely ignored advice from local experts. In this respect, Bangladesh has not been different than many developed countries around the world. The UK and the US, for instance, had comprehensive pandemic protocols, and competent experts, and yet chose to ignore them, to the detriment of their people.

In the UK, it is alleged that in spite of its robust civil service, every decision now comes out of 10, Downing Street; and President Trump has repeatedly undermined and overruled expert advice.

With over 285,000 confirmed cases and over 3,800 deaths already, the government has become increasingly sensitive to criticism. It is using the draconian Digital Security Act (DSA) to curb criticism of its handling of the coronavirus outbreak. The Act was ostensibly passed to prevent digital crime. However, by allowing the police to arrest people without a warrant, it is seen as a serious threat to freedom of expression.

Scores of people, including journalists, activists, cartoonists, medical professionals, students and opposition party politicians, have been arrested under this law.

In more recent days, at least, the focus has shifted from tackling the spread of the coronavirus alone to restructuring the much-maligned healthcare system, and catching bad players that have benefited from the system. The Prime Minister publicly expressed her annoyance at the corruption, and ordered a probe into the matter. The Anti-Corruption Commission (ACC), in the meantime has stepped up its operations against corruption in the health and relief sector, and has requested information from the Health Service Division, Directorate General of Health Services, and Central Medical Stores Depot on mask and PPE purchases.

Despite governmental inefficiencies, the crippling effect of the coronavirus and the blow to the economy, Bangladesh can still be hopeful for the future. The ADB projects that Bangladesh will grow at 6.2% in the fiscal year 2021. Despite the economy slowing down in 2020 due to COVID-19, the economy is likely to recover in 2021, helped by strong manufacturing activity.

Despite governmental inefficiencies, the crippling effect of the coronavirus and the blow to the economy, Bangladesh can still be hopeful for the future, as the economy is likely to recover in 2021.

Years ago, during a particularly turbulent period in the country’s more recent history, the CEO of a foreign bank noted that Bangladesh is always delicately balanced on the edge of disaster. And just when the world thinks it will go over the edge, Bangladesh somehow manages to pull itself back.

We can only hope these words ring true again. 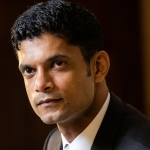 Shahzad has worked in the steel sector in Bangladesh since 2017. Prior to that, he worked on a microinsurance project and in developing an insurance product attached to loans to the poor, which was piloted in some parts of the country before being successfully deployed across all of Bangladesh.