The global Islamic finance expert talks about factors limiting the growth of the industry
16.03.2021
An interview with
Bashar Al-NatoorSenior director and global head of Islamic finance, Fitch Ratings

There are 1.8 billion Muslims in the world today, comprising almost a quarter of the world’s population, and yet Islamic finance is only a tiny share of the global financial market. While Islamic finance has grown in prominence as a concept, the adoption of Islamic finance products and solutions—as laid out by sharia law—remains limited compared to its potential.

We spoke with Bashar Al-Natoor, global head of Islamic finance at Fitch Ratings, about the challenges faced by Islamic finance, the importance of standardisation and harmonisation, innovation in the industry and post-COVID developments, among other things.

Unravel: Barring the Middle East and Malaysia, awareness of Islamic finance is still low. How can this awareness gap be bridged and why is it important?

Bashar Al-Natoor: In the Middle East, while awareness levels are not low, they are also not optimal. In Saudi Arabia, Islamic finance accounts for 80% of the bank financing, but there is room for improvement there in other sectors and in other countries when it comes to awareness. This is not only on the consumer or customer side, but also among associated stakeholders. Awareness among corporates, banks and other stakeholders in the industry can all be improved.

Even in Malaysia, there are gaps in awareness. For instance, as recently as in 2019, the Malaysian central bank said that close to 60% of Malaysian SMEs were not aware that Islamic banking facilities were available.

Outside of these markets, the Islamic finance market remains underdeveloped owing to a number of factors, including low levels of awareness.

Unravel: How big is this untapped Islamic finance market?

Mr Al-Natoor: There are approximately 1.8 billion Muslims in the world, or about 25% of the world’s population. Among them, about 60% are still unbanked, of which about 6% excluded themselves financially due to faith-based reasons, based on World Bank data. So, the first dimension of the untapped market is the large share of those unbanked owing to poverty, poor infrastructure, and the like. And the second dimension is that they are not engaging in financial markets of any kind owing to religious reasons. This provides an indication of how big this untapped market is.

Mr Al-Natoor: Here, we are talking about markets that have Islamic banking, more specifically sukuk, but where penetration is still low. Indonesia, for instance, has a significant Muslim population, but Islamic finance comprises less than 10% of its entire financial market. There are strategies in place, and there is effort from the government to promote Islamic finance, but there is still a lot that can and needs to be done. The Islamic banking industry has developed to some extent, but takaful is less popular. The potential upside is very high if the market is developed properly. In Indonesia, the government has been very active in recent years on the sukuk issuance side internationally and domestically. However, activity among banks, corporates and other non-government issuers has been very limited. In fact, the sharia financial literacy rate in Indonesia stood at just 8.9% in 2019. However, we must bear in mind that this is not simply because of Islamic finance’s shortcomings or a lack of awareness around Islamic finance in particular, but because of the poor development of capital markets more broadly, when it comes to sukuk.

It is a similar scenario in Turkey, another country with a large Muslim population. For example, the Islamic (participation) banks’ share of sector assets, although growing above sector average growth, stood at only 7.2% at end-2020 (end-2019: 6.3%). Turkey still faces issues relating to low public awareness, low demand of and confidence in Islamic products, along with relatively limited product offerings and distribution network. However, the long-term growth potential is high due to the government’s support for the sector, growing policy role of state-owned Islamic banks and Turkey’s Muslim population, of which 31% is unbanked.

Unravel: There are approximately 240 million Muslims in ASEAN. Do you see the region becoming a major hub for Islamic finance?

Indonesia, on the other hand, was the first to issue a green sukuk globally, but then other elements are missing. Similarly, there are other hotspots in Asia, such as Pakistan. In the Middle East, Dubai is trying to take the lead and be seen as a hub for Islamic finance. In fact, there are many countries that have strategies in place that target development of Islamic finance. But there isn’t a single “global hub” per se.

Unravel: Like everything else, Islamic finance too took a hit in 2020. How do you see it bouncing back in 2021?

Mr Al-Natoor: Islamic finance is not cocooned from what is happening in the broader economy – it is part of the operating environment and its recovery path will mirror that of conventional finance. Yes, Islamic finance has its specific challenges generally speaking, but when it comes to the impact of COVID-19, it is largely the same as other sectors. Though I’ll add that while many are expecting a bounce-back in markets this year, we don’t know whether it is going to be this year or the next.

Unravel: What changes can we expect to see in post-pandemic Islamic finance? Will we see more modernisation and innovation?

Mr Al-Natoor: Are we going to see more profit and less sharing? Are zakat and wakf going to become more prominent? I’m not sure. Will we see the more effective use of zakat funds? I would say not immediately, but things could move in this direction if there is a political will and adoption by industry stakeholders.

We will see more modernisation because it is a need. We’ve seen offerings such as green sukuk and social sukuk expanding, accelerated because of COVID-19. To attract a wider investor base, the industry broadened its scope and started offering more. That is likely to continue.

Unravel: What role do you see for fintech in Islamic finance?

Mr Al-Natoor: There is basic fintech (such as online banking or mobile banking) and there are also more exotic aspects of fintech like cryptocurrency and blockchain. Islamic finance has been careful in picking and choosing what is really necessary, because there needs to be clarity around whether these initiatives are sharia compliant. As compared to conventional finance, that is an extra mile that Islamic finance needs to go.

Outside of banking too, several initiatives can be seen, but their impact is relatively small.

Unravel: One of the key talking points in Islamic finance is the lack of uniform standards and regulations. Is this being addressed?

Mr Al-Natoor: Standardisation in Islamic finance is very different – it is a complex sphere. This needs to be looked at by way of a five by three dimension. There are five main elements, namely supervisors and regulatory frameworks, law and dispute regulation, sharia, financial and accounting reporting, and product and dimension; and these five elements have to be looked at locally, regionally and internationally. It is a multi-dimensional challenge. 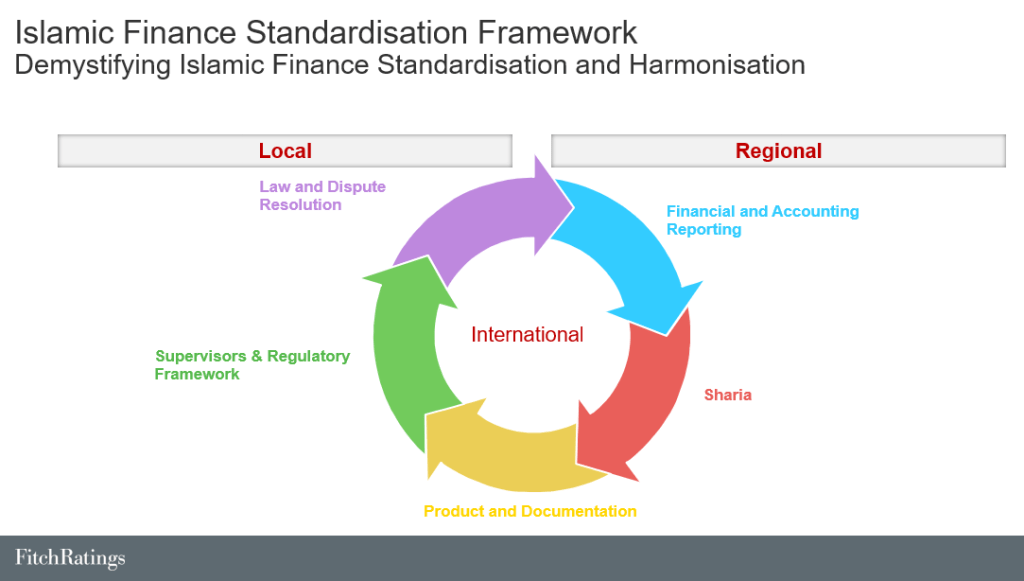 Malaysia has been very successful in doing this locally, but these are not standards and frameworks that are widely adopted elsewhere. In fact, there are sometimes differences even within the same country. For example, banks in the same syndication can have two different structures and tranches due to different fatwas by each bank, due to different interpretations of sharia.

Malaysia is a leading example. It has thriving Islamic finance, banking and takaful industries. There are initiatives in the UAE to have some kind of global standardisation, so it will be interesting to see the results of such initiatives.

This is a critical challenge for the further adoption and development of Islamic finance, because at the end of the day, if you don’t understand what you are dealing with, how do you deal with it?

Unravel: In the halal industry, we have seen a growing trend of tapping into the non-Muslim market. Is the same happening in Islamic finance?

Mr Al-Natoor: If we are to classify customers from a banking perspective, they are of three types. The first is Islamic customers who will deal only with Islamic finance regardless of the quality or type of products. The second type comprises customers that have some sharia sensitivities, and will say that if the quality and offerings are the same as in conventional finance, then they’d pick Islamic finance. The third kind is the customer who will only do it if Islamic finance is offering better quality, better service, better returns or if it is addressing some of their ethical requirements.

As of now, the third category of customer is very small although it has the potential to be the largest globally, because there’s a lack of awareness in the industry, and when there is awareness, there is still the lack of confidence that needs to be addressed.