COVID-19 has driven down the comprehensive power of almost all states in 2021, weakening their capacity to respond to and shape their external environment
08.02.2022
Unravel editorial team

An aerial view of Sungai Kebun Bridge in Brunei Darussalam. In the rankings, Brunei emerged as the greatest gainer in Asia. Photo by Shutterstock.

As the largest continent in the world, the dynamics of Asia’s 48 states are complex and shifting, as volatile state politics, natural disasters and international conflict roil throughout the region. Over the last decade, it has become nearly cliché to say that the nodes of power are shifting East, but the Lowy Institute’s 2021 Asia Power Index seems to indicate that this isn’t necessarily the case for now.

According to the 2021 version of the Asia Power Index, the region’s overall power has waned in 2021 thanks to COVID-19 and a weakened China.

This year, the report found that despite its ambitions as a regional leader in the Indo-Pacific, China’s overall comprehensive power (74.6 points) fell for the first time compared with 2020. On the other hand, its rival, the United States, bucked the global downward trend in power as its comprehensive power rose to 82.2 in 2021, its first annual gain since 2018.

However, China still leads regional rankings, leading to an increasingly polarised global order, with powers shifting to align themselves with one of the two superpowers. US-aligned countries like Japan and Australia are finding themselves ever-more reliant on their ally for defence against China, while Southeast Asian states struggle with the increasingly difficult challenge of hedging their bets between the competing powers. 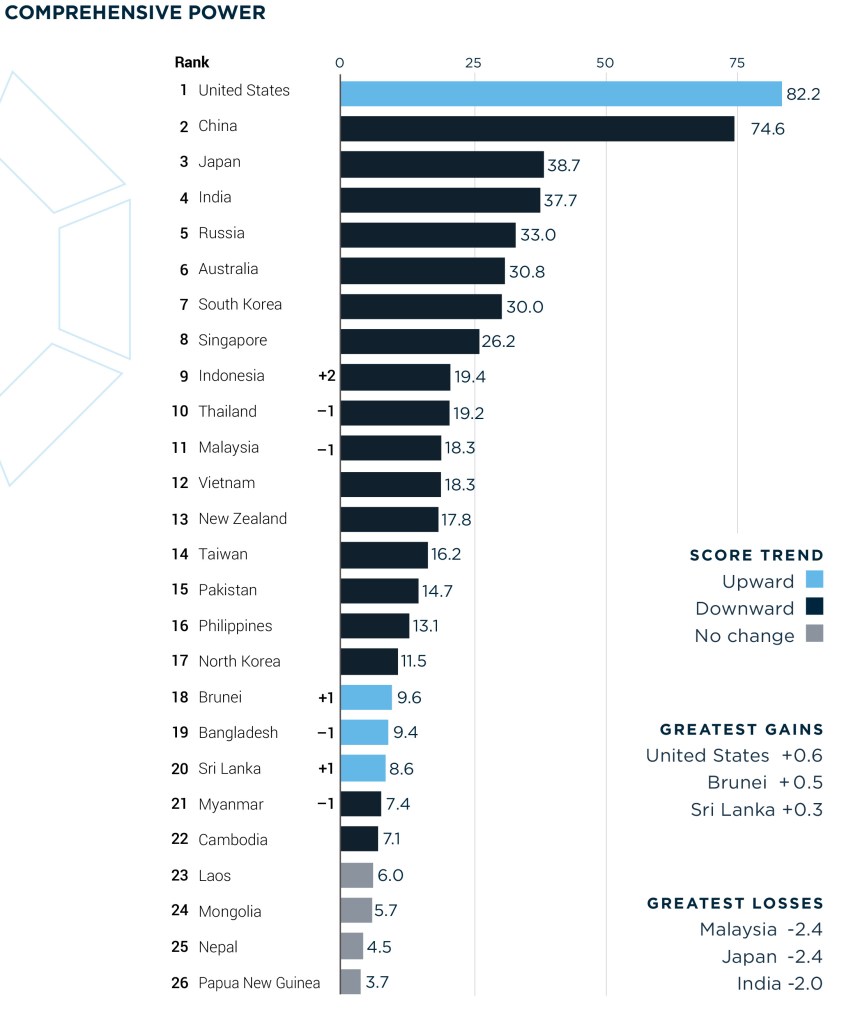 The Lowy Institute’s index was first launched in 2018, and aims to give a measurable understanding of how the balance of power in Asia shifts over time, and tracks countries’ ability to directly or indirectly influence others, and the course of international events.

Each country’s comprehensive power is assessed across eight themes that include military capability; economic capability; diplomatic influence; resilience; future resources; cultural influence; economic relationships; and defence networks. Generally speaking, each category helps determine what resources are available to a country, and how state actors choose to use what’s at their disposal. 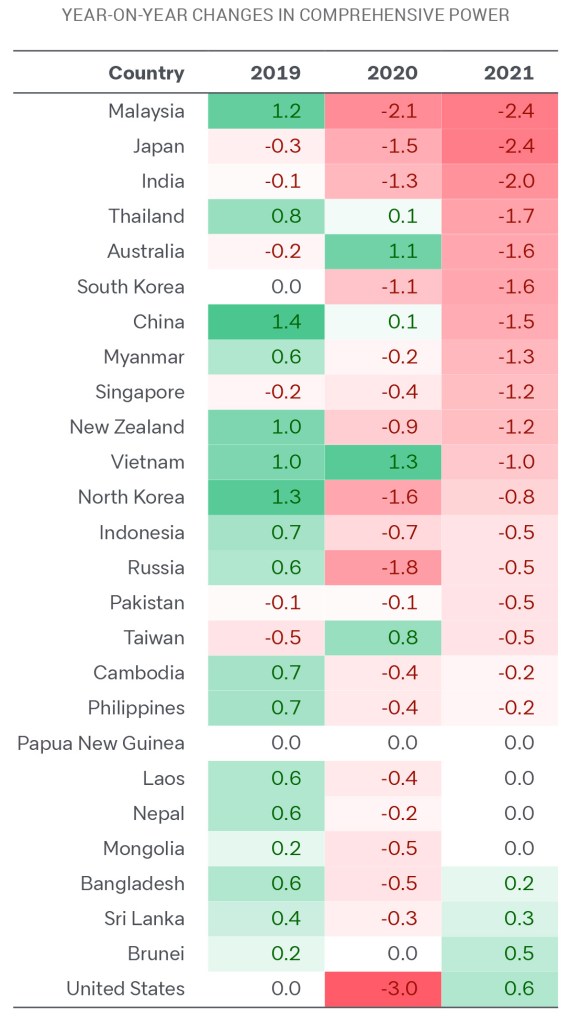 The most important event that has impacted each country’s comprehensive power since the Index’s launch has been COVID-19. The subsequent health and economic crises have led to 18 countries experiencing downward shifts in their national resources and international influence between 2020 and 2021. The largest reductions in 2021 were seen in Malaysia and Japan, who both saw their power fall by 24 points.

The US’s gain in comprehensive power can be attributed to rises in two critical rankings: diplomatic influence and future resources. The report lays much of this progress at the feet of the newly-installed Biden administration, whose domestic policies and international coalition building efforts have helped them improve public health outcomes, and make a faster-than-expected economic recovery.

Exhibit 3: US comparative advantage in 2021 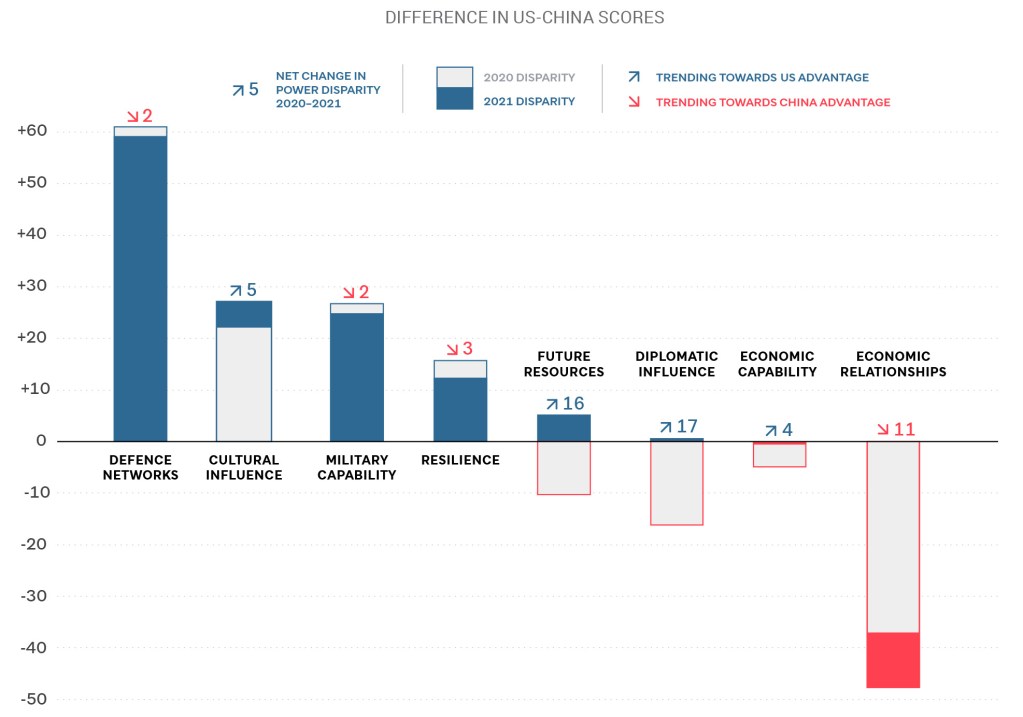 The new administration’s liberal use of “vaccine diplomacy” has also vastly improved their international standing. These positive developments stand in contrast with China’s situation, where growing economic and demographic headwinds threaten their historical upward momentum.

In four out of eight indexes—including diplomatic and cultural influence, economic capability and future resources—China’s comprehensive power has declined. China’s existing capacities and its strong showing prior to the pandemic will not necessarily undermine its power in a substantial way, but it’s a sobering thought for those who thought the country’s rise was “inevitable.” 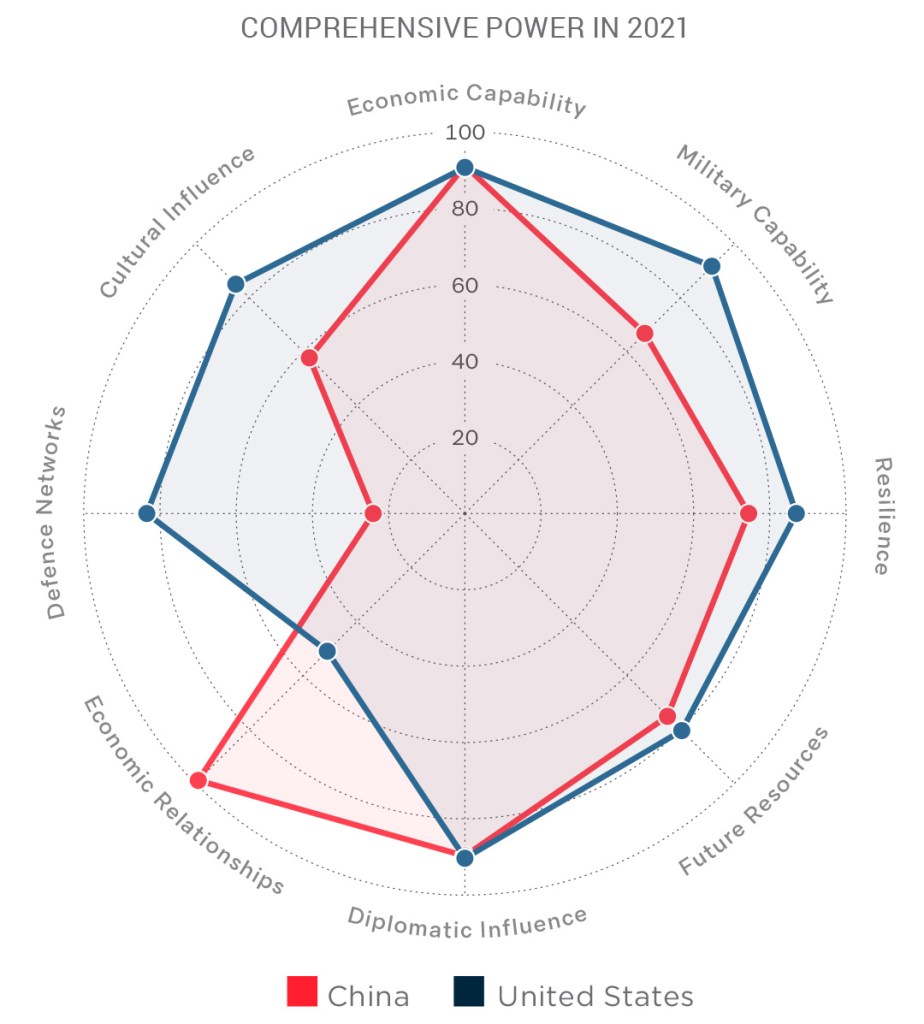 That being said, China remains a regional leader—especially when it comes to its influence among Asian countries, where its economic and military strengths are concentrated—and has posted strong scores in terms of its resilience against external threats. The superpower has become less dependent on trade with Europe and the US as its economics shifts toward domestic consumption.

However, turning inward has proven to be a double-edged sword. China’s strict border and infection controls in response to COVID-19 has negatively impacted its diplomatic influence and the speed of its economic growth. 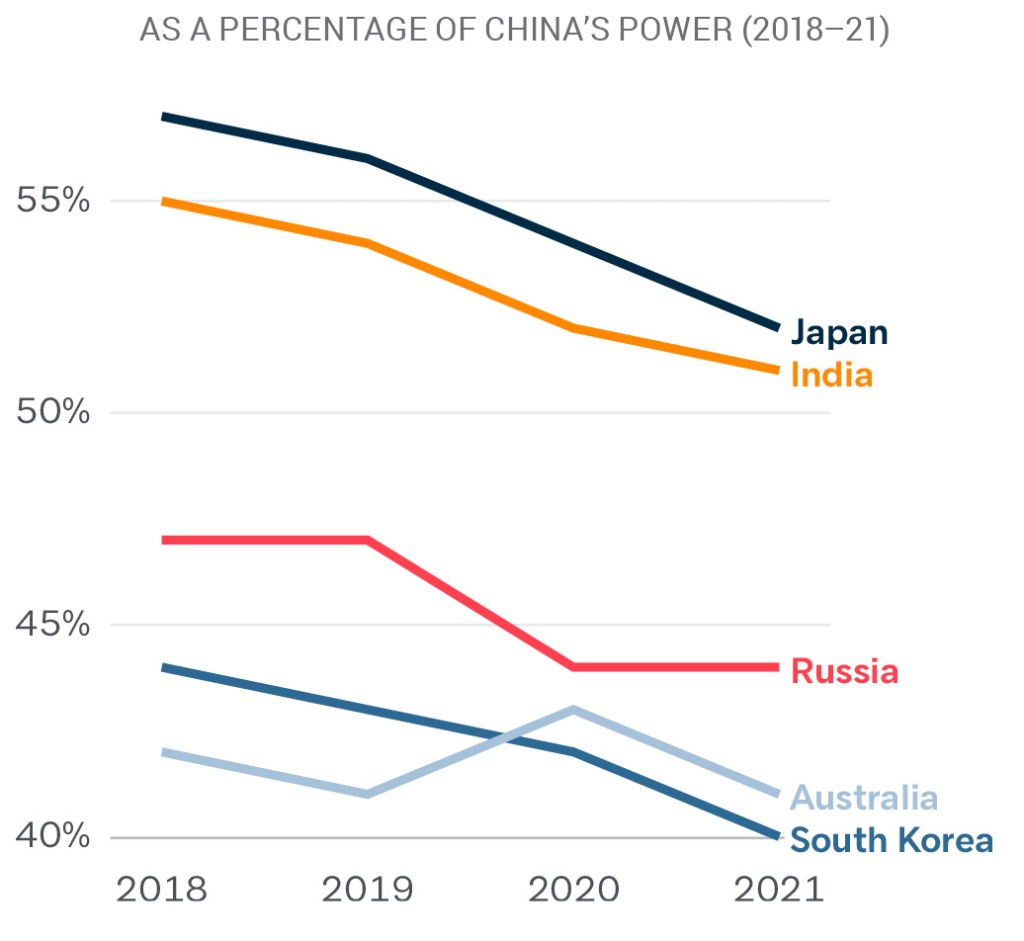 The report highlights that the region has become increasingly bipolar and less multipolar, as the US and China struggle for supremacy in the region. Countries like Japan and India—once considered to be the best candidates to counterbalance the two superpowers’ outsized influence—have lost huge margins in 2021, and are visibly struggling to decide which country to align with.

In many cases, decisions have been made: Japan and Australia have solidified defence relationships with the US as a counterweight to China.

However, US defence might have its limitations, and the report notes that the new realities of Asian politics and the impact of the US’s withdrawal during the Trump years will limit US prospects in a region indelibly shaped by China. Meanwhile, China will retain its superpower status and its spending on military resources is growing, but it is becoming increasingly obvious that it will not become as dominant as the US was in the late 20th century. 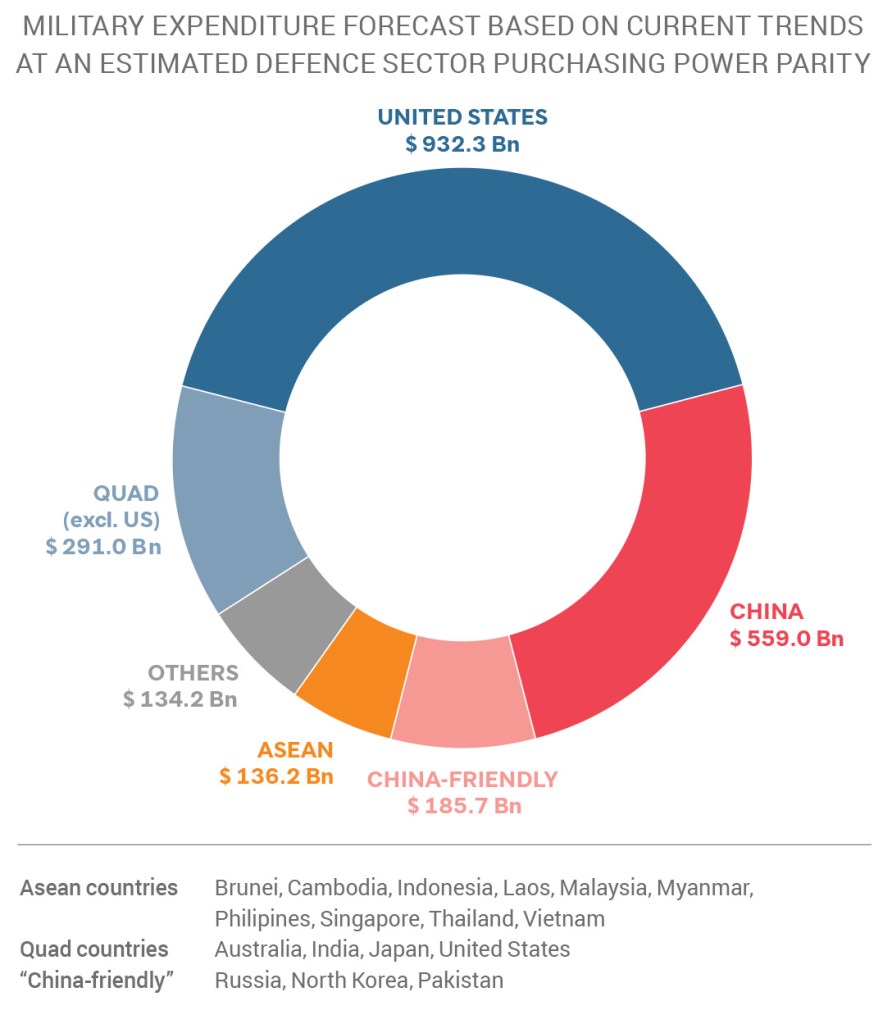 A closer look at the report shows a growing power gap between countries on certain measures. A secondary analysis to the Asia Power Index is the Power Gap, which provides a nuanced look at the interplay between countries’ resource and influence, filling in the details of how power manifests.

“Countries can be overperformers or underperformers, irrespective of where they place in the rankings,” says the report writers. “Countries with outsized influence in Asia relative to their resources have a positive Power Gap [while those] that exert undersized influence relative to their resources register a negative Power Gap.”

The positive scores provide a measurable way to assess how efficiently each country uses the tools at their disposal, a method that allows analysts to cut across differences of culture, policy and outlook.

For example, Japan ranks highly in the Power Gap analysis for its ability to efficiently transform limited resources into broad-based diplomatic, economic and cultural influence. As a result, Japan—a country with strong interests in cultivating diplomatic ties, and export-oriented policies—logs a score of 10.5 points (the highest in the region) compared with North Korea, whose emphasis on military resources and isolationist policies, have given them a -7.3 score.

The report also includes comprehensive breakdowns of countries’ performances within each of the eight categories of power. The performance of China’s economic powerhouse has declined, though it has retained its top rank in terms of economic capability (91.2 points) and economic relationships (99 points). The country will continue to flex its economic muscle, though the US will continue to pose a challenge through its diplomatic policy, where it exerts a lot of influence. The Index shows that US diplomatic influence remains strong, especially in comparison with China, whose COVID-era isolationist policies have pushed it into a narrow second place.

Exhibit 8: Measures of power (i) 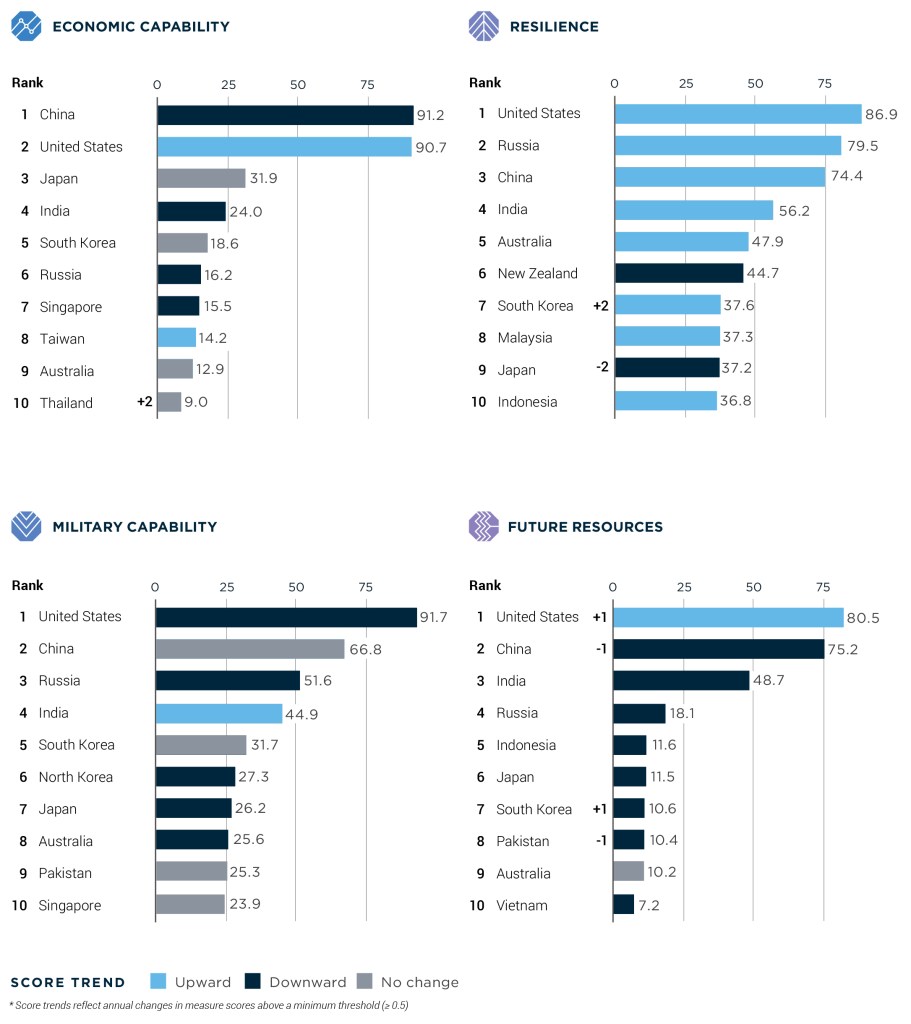 Interestingly, Russia and Indonesia have made some gains in terms of diplomacy—2 points each—as the Russia tries out a form of vaccine statecraft through its Sputnik V shot, and as Indonesia’s President Joko Widodo cements his role as ASEAN’s leading statesman.

However, the fact of the matter is that the country is experiencing a decline in its military influence as China (66.8 points) and Russia (51.6 points) mount successive challenges. That being said, the ultimate score remains an open question as the full impact of its defence networks like the AUKUS pact and the Quad alignment—whose members include India, Australia and Japan—come into play. 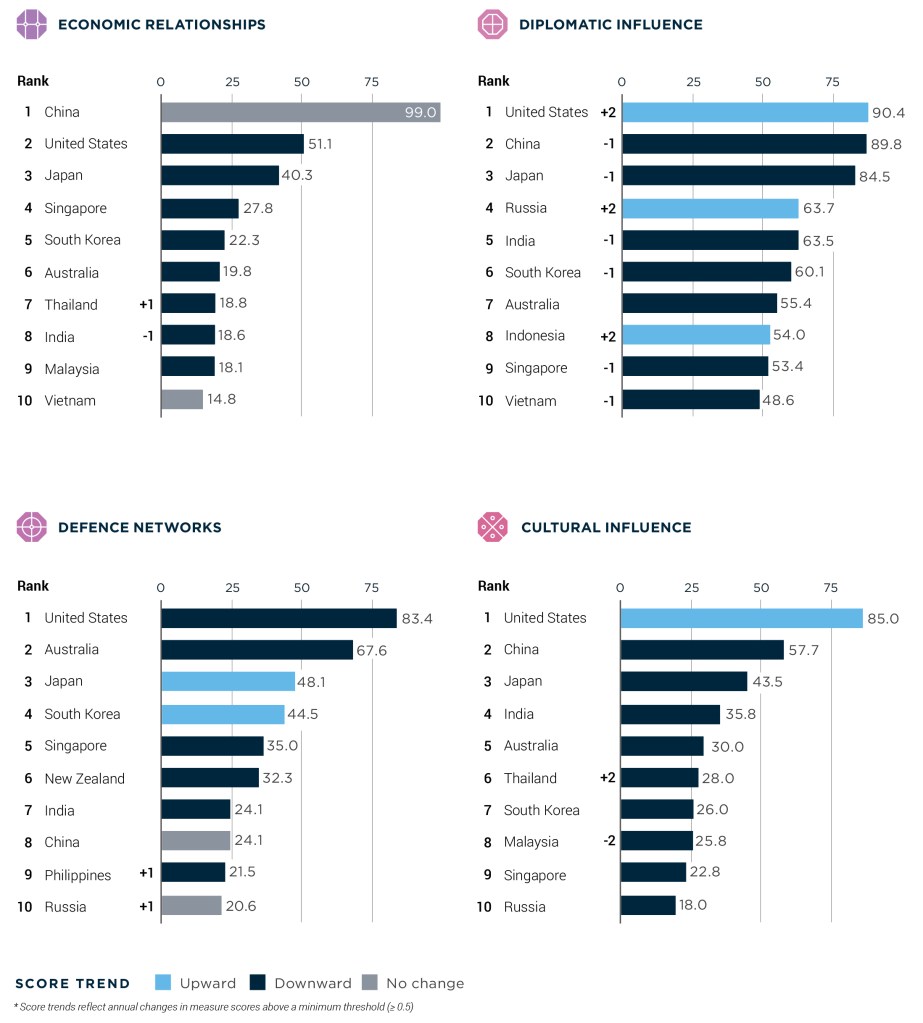 Looking ahead, there is some reason to believe that the US will continue to hold much sway over Asia into the future – thanks to its command of future resources and cultural influence. China’s greying population, poor resource management and structural weaknesses are having a depressing effect on its access to future resources (75.2 points), while the US’s strong economic recovery and return to the world stage have helped push it into pole position (80.5 points).