Most large stimulus packages announced in Asia lean on financial guarantees, and will have a limited effect in immediately mitigating the economic slump
11.06.2020
Priyanka KishoreHead of India and South East Asia, Macro and Investor Services at Oxford Economics

A couple walks by the Marina Bay area in Singapore’s central business district. Singapore and Japan are leading the region in terms of the scale of the response, with fiscal packages amounting to 20% of GDP. Photo by Victor He on Unsplash

Most large stimulus packages announced in Asia lean on financial guarantees, and will have a limited effect in immediately mitigating the economic slump

The COVID-19 pandemic and the consequent economic fallout have prompted governments in the Asia-Pacific (APAC) to plan and announce economic stimulus packages to revive their economies. Fiscal activity in the region has picked up markedly over the last couple of months as a result.

Our own estimates put the full-year output loss from containment measures at $1.5 trillion for the major APAC economies alone, underlining the need for a strong and effective policy response to ensure robust recoveries following the lockdowns.

Monetary policy responses across the region have been rapid too, with central banks lowering rates and announcing other measures to alleviate economic stress. But the disruption to the flow of goods and people, and the effective shutdown of several sectors for a prolonged period, has made it clear that central banks alone cannot engineer a strong revival.

Encouragingly, governments have taken note. Advanced APAC economies—most of whom have ample fiscal space—announced large relief packages early on to soften the blow of the lockdowns. So too have emerging economies, although their packages, in general, are smaller in scale.

However, in our view, the actual fiscal impulse from the measures will vary substantially between economies, given that financial support schemes account for a large share of the relief packages in many economies and not all the planned spending is necessarily new.

On the face of it, Japan and Singapore are leading the region in terms of the scale of the response with fiscal packages amounting to 20% of GDP or more (Figure 1). South Korea, Thailand and Hong Kong are next in line.

Figure 1. Governments have ramped up fiscal measures to soften the impact of lockdowns 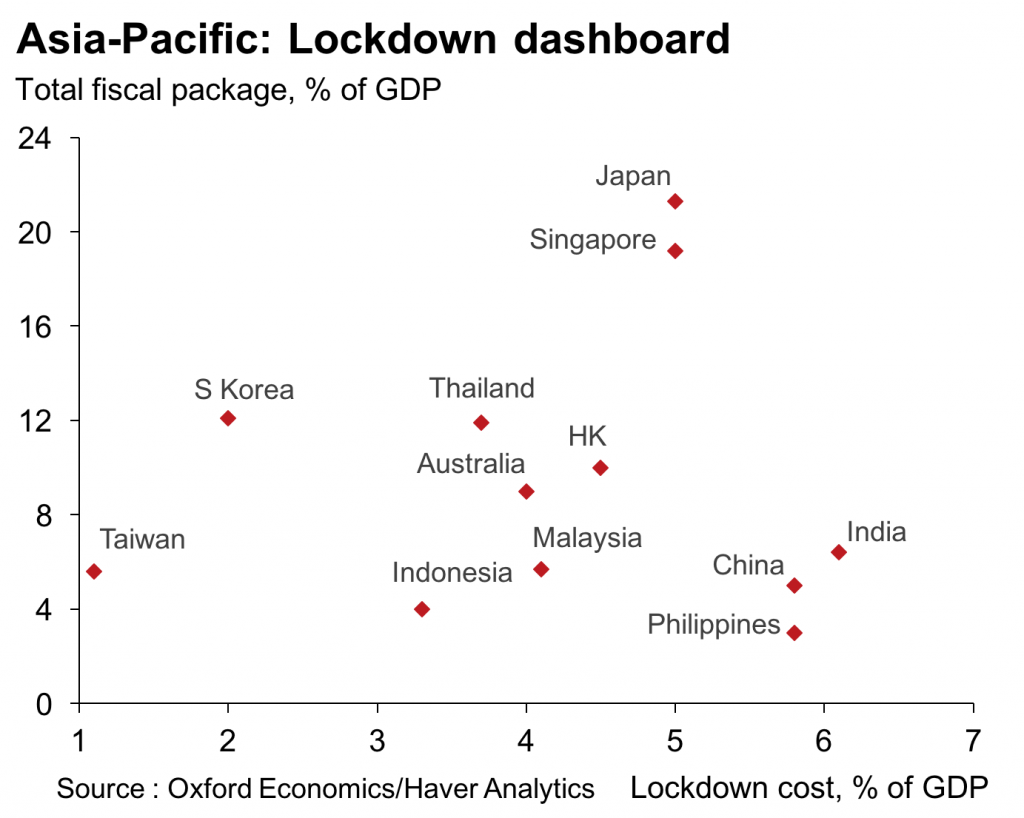 Not all regional economies are able to match these responses. At the other end of the spectrum are India and the Philippines, which have announced quite meagre fiscal support so far despite having more stringent lockdowns.

Figure 2. New spending is limited as reflected in these forecasts 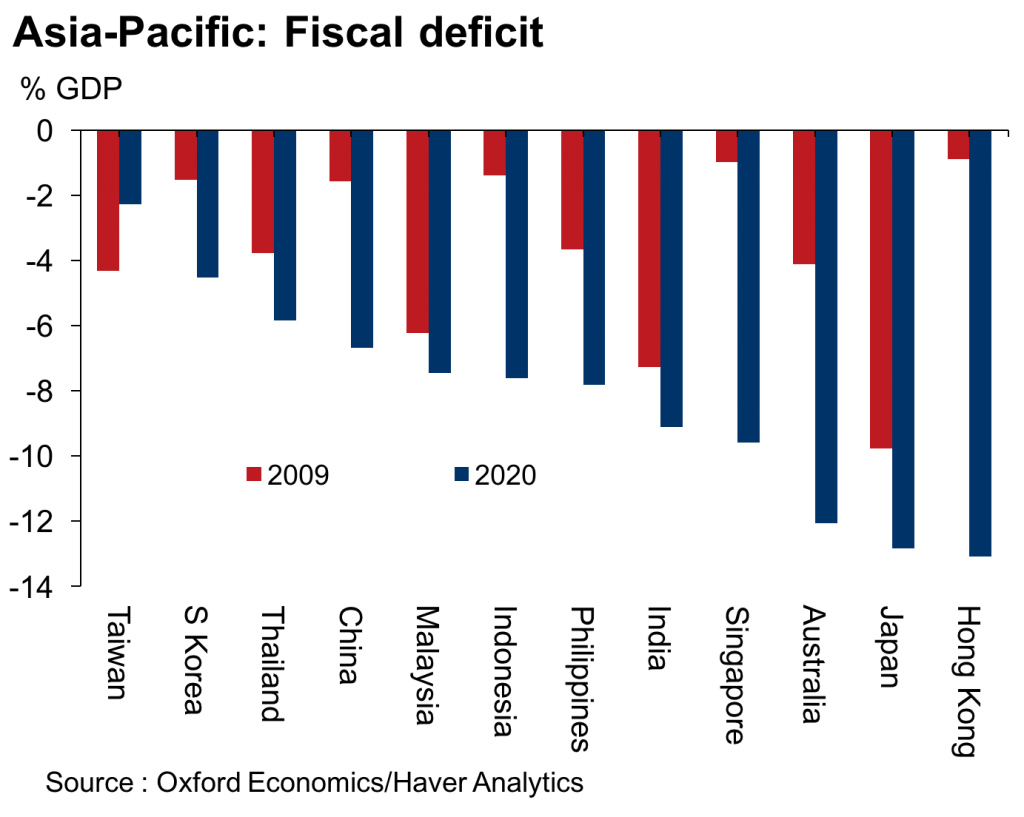 Less than meets the eye

Our fiscal deficit forecasts have widened across the board in the past few months and are expected to top Global Financial Crisis levels in many economies this year (Figure 2). Indonesia has suspended its 3% deficit ceiling rule for three years and we expect India to temporarily deviate from the Fiscal Responsibility and Budget Management Act as well.

That said, the bigger deficits are in large part due to automatic stabilisers kicking in, primarily via taxes. The pick-up in discretionary spending is modest for most economies due to a few factors.

First, not all of the discretionary spending pledged in relief packages is really new. Some of the rescue efforts involve front-loading spending that has already been in the pipeline.

And second, the fiscal packages subsume financial rescue packages in the form of debt moratoriums, loan guarantees, among others (Figure 3). This is especially true of Malaysia, where the government’s economic relief package also included monetary measures. In India, direct fiscal measures amount to just 1.1% of GDP, a mere fraction of the total economic support package estimated at 10.3% of GDP.

The financial measures are important to ensure credit continues to flow and firms have liquidity support in case of stress. However, they will have a limited effect in immediately mitigating the adverse demand shock that is likely to follow the supply shock, as containment measures are eased.

Figure 3. Large parts of fiscal packages are in the form of guarantees and financial measures 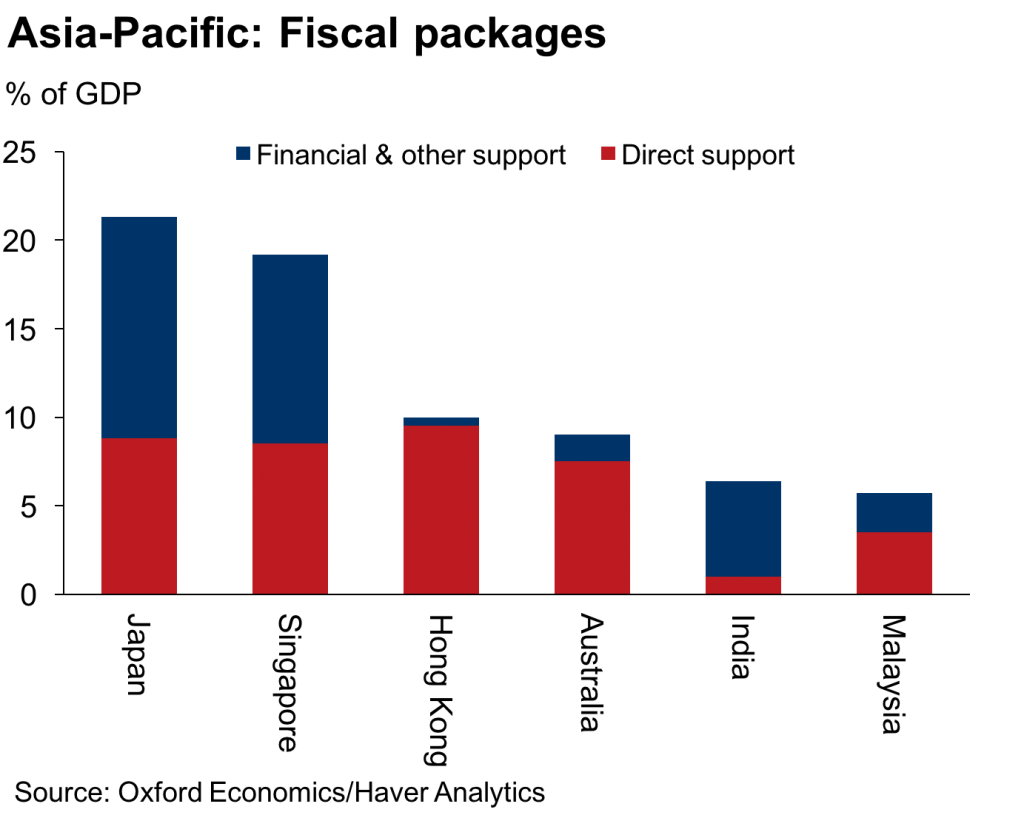 What does this mean for growth?

Authorities hope that the fiscal support will help preserve human capital and the productive capacity of the economy, and position their countries well for a post-lockdown recovery. Still, the response is unlikely to be strong enough to keep the region from slipping into recession this year.

This is mainly because the economic impact of the pandemic is massive. But also, as our assessment shows, the actual fiscal impulse (change in the cyclically adjusted fiscal balance) is likely to fall well short of the face value of the announced relief packages. It is estimated that the increase in fiscal deficits will largely be in the low single digits for the APAC region this year. This is in contrast to the US and Europe, where irrespective of the additional discretionary spending, large scale automatic stabilisers in the form of social security schemes and unemployment benefits add significantly to the rise in the deficit.

Public unemployment spending in both Japan and South Korea are below the OECD average, let alone that in emerging Asia. This makes it more challenging for governments to devise a well-targeted relief package in a timely manner, especially in economies with a large informal sector, such as India.

The long road to recovery

Indeed, emerging Asian economies appear particularly ill-placed to navigate the post-lockdown recovery. Despite not having pushed enough on the fiscal pedal, wider deficits have already raised rating downgrade risks materially for India, Indonesia and Malaysia. Moody’s downgraded India to the lowest investment grade level on 1 June and has retained a negative outlook. Fitch changed Malaysia’s rating outlook to negative on 9 April, and S&P has revised down its outlook for Indonesia. Therefore, the likelihood of substantial fiscal spending going forward appears low.

At the same time, India, the Philippines and Indonesia are still struggling to control the spread of the coronavirus, even as they reopen their economies. This warrants close monitoring as heightened concerns of contracting COVID-19 could impinge on mobility and act as a constraint on activity well after the official reopening.

On the whole, the APAC region is on course for a two-speed recovery with most emerging Asian economies likely to lag the developed ones by a wide margin.