A sluggish start to the new year for China’s economy

New COVID-19 cases have emerged in China, prompting lockdowns in many parts of the country. Photo by Shutterstock.

While February is typically a quiet month for activity data, data from the weeklong Chinese New Year (CNY) holiday (between January 31 and February 6), as well as PMI and credit data, could shed more light on how China’s economy is performing at the start of the year. The latest PMI readings suggest that both manufacturing and service activities weakened in January amid soft demand and some supply disruptions (Exhibit 1). 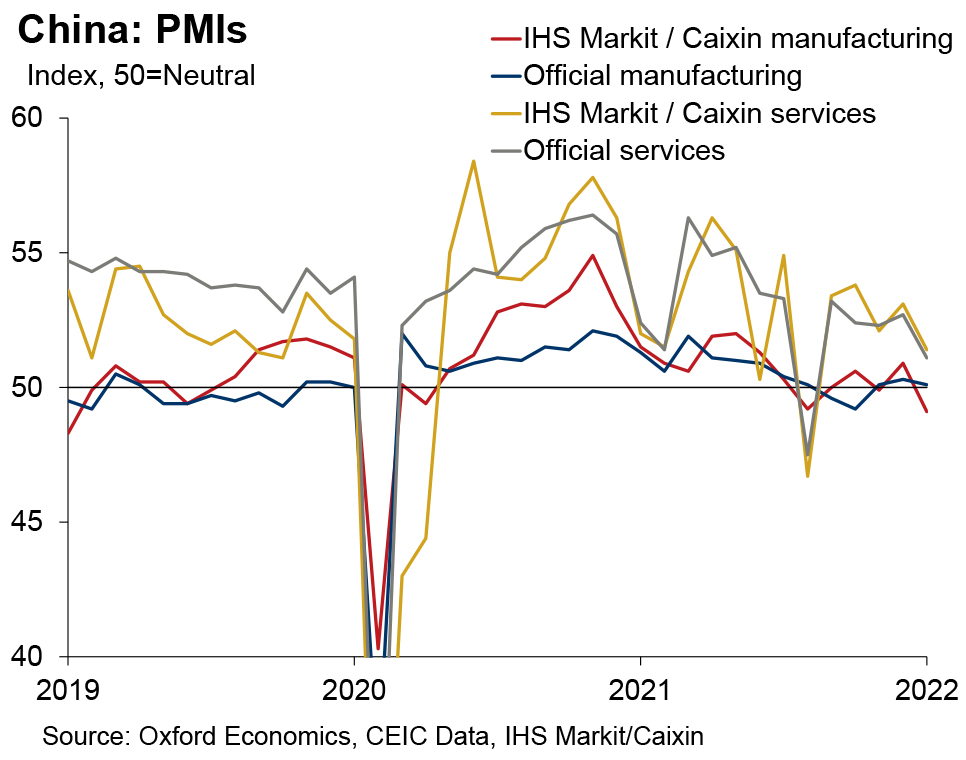 Consumption in China has been weighed by the country’s zero-tolerance approach to stamp out small COVID outbreaks and caution among the general public. Indeed, data from the CNY holiday suggest a mixed picture for household consumption. The number of pre-holiday passenger trips increased 47.6% from the CNY holiday last year (but was still down 64.6% from the 2019 CNY holiday). This suggests that more people travelled back to their hometown, which may have benefited consumption in lower-tier cities and inner provinces. However, domestic leisure travel fell 2% compared with last year’s CNY holiday, and tourism revenue dropped 3.9% (down 43.7% from 2019). Consumer spending in cities and suburbs, as well as online consumption, continued to benefit from reduced travel relative to pre-pandemic levels. But movie box-office sales during the holiday fell 23.1% compared with last year.

Retail sales grew 20.1% compared with CNY holiday sales last year, according to the State Tax Administration (based on VAT data). This is up from 9.9% year-on-year during the weeklong National Day holiday in October last year. However, the linkage between retail sales during long holidays and monthly retail sales appears to have weakened over the past year, causing holiday spending data to be less useful in helping to predict goods consumption momentum (Exhibit 2). 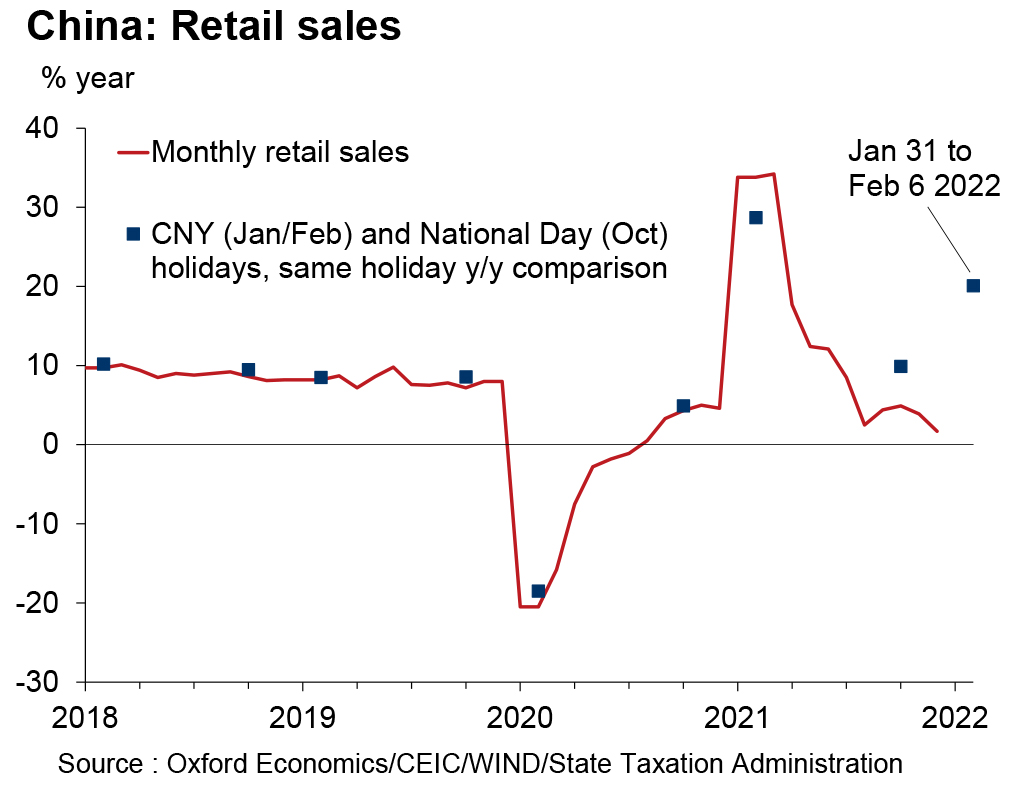 Meanwhile, non-cash payment data by the PBoC suggests overall consumption growth has slowed. The payment amount during the CNY holiday grew 16.2% compared with last year, down from the 24.1% year-on-year growth during October’s National Day holiday.

In all, the mixed picture suggests that the overall momentum in household consumption has remained sluggish, with relatively robust goods sales being offset by weak demand for services. 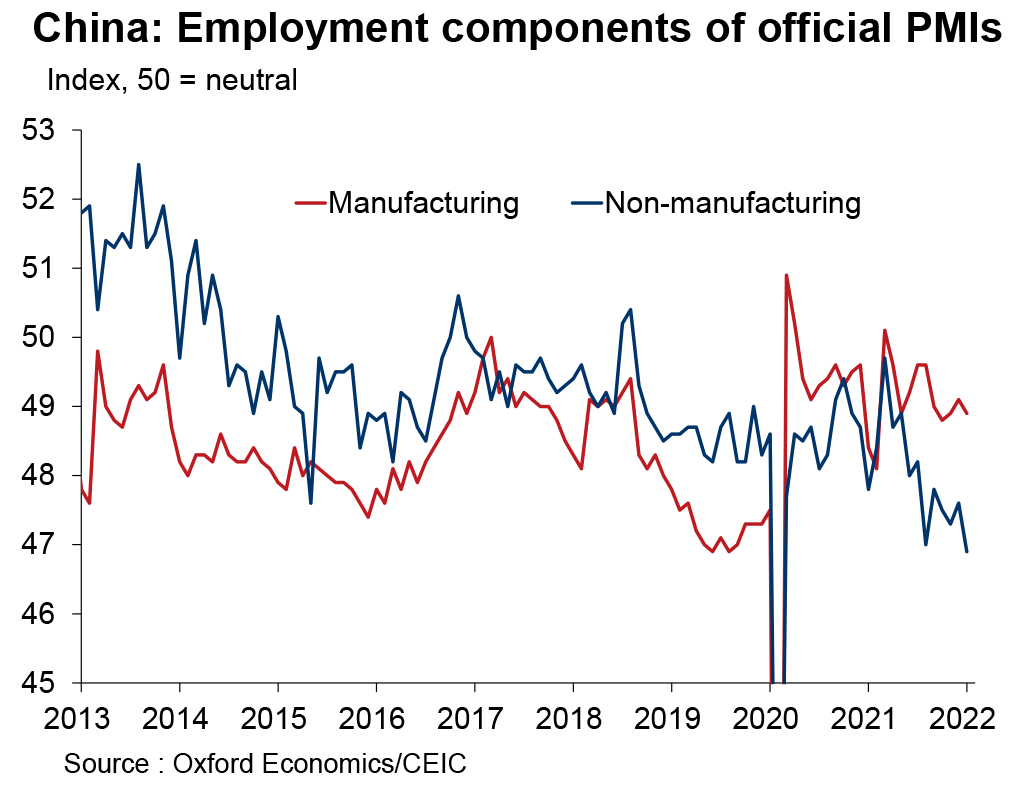 The real estate slowdown, which has been amplified by tight property sector regulations and credit policies, Evergrande’s problems, and defaults by other high-profile property developers, has continued to weigh on homebuyer sentiment and fixed investment in real estate in 2021. Encouragingly, housing sales may have started to stabilise amid an increase in mortgage lending, easing mortgage restrictions, and efforts by local governments, such as offering home-purchase subsidies to first-time homebuyers. Nonetheless, we expect sales to remain at relatively low levels in the near term. High-frequency data suggest they remained subdued, down 20% year-on-year in the weeks before the Chinese New Year, similar to the decline in Q4 2021.

We project fixed investment in real estate and housing starts to fall further through the first half as we think the government will largely stick to its tight “three red lines” that define thresholds on property-developer financing. But we expect the authorities to further encourage banks to extend credit to property developers, and more developers (mainly state-owned ones) will be approved for onshore bond issuance, which will help offset the decline in developers’ cash flow due to decreased housing sales.

These efforts are meant to keep existing housing construction projects afloat, to facilitate project mergers and acquisitions, and help developers in a stronger financial position to purchase assets from troubled developers. The latter will help to ease liquidity problems among troubled developers and debt repayment.

Credit and infrastructure spending to pick up

Following a downtrend in the first three quarters of 2021, credit accelerated in recent months, reflecting monetary easing. Growth in total social financing rose at a steady pace to 10.5% year-on-year in January, up from 10% year-on-year in October last year. This was supported by an increase in corporate and local government bond growth (Exhibit 4). 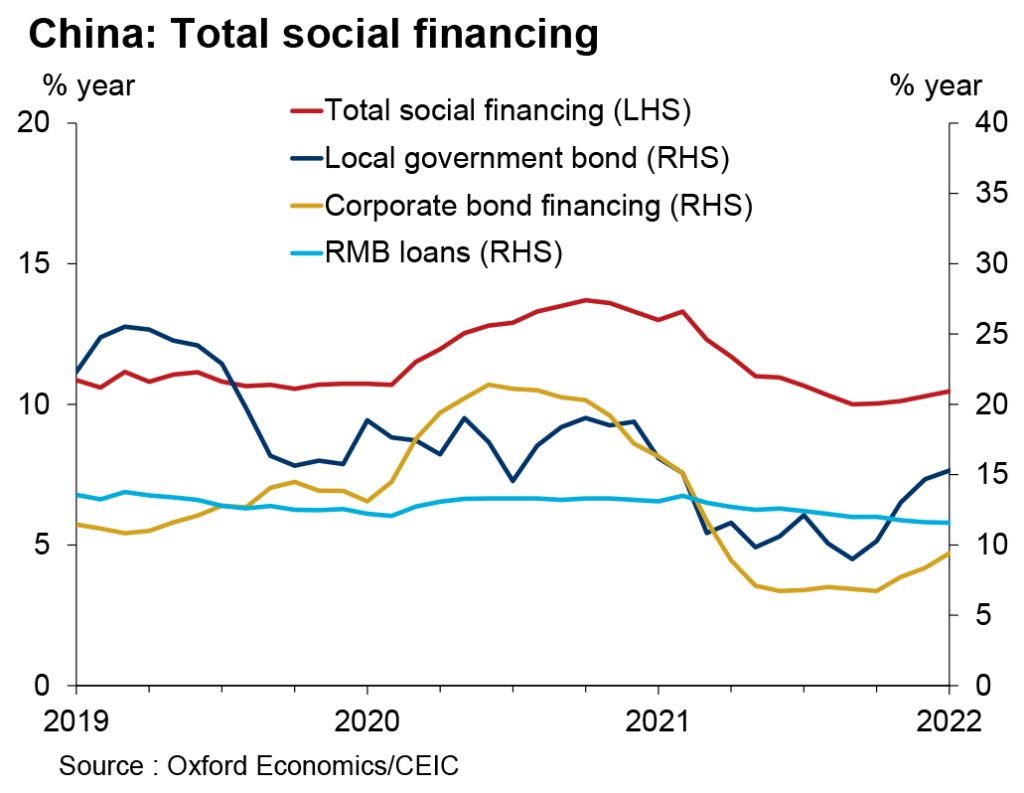 In particular, the pickup in local government special bond issuance should support further improvement in infrastructure investment, which grew in December 2021 (3.5% year-on-year in nominal terms) after contracting in the previous months (Exhibit 5).

Exhibit 5: Infrastructure spending is picking up 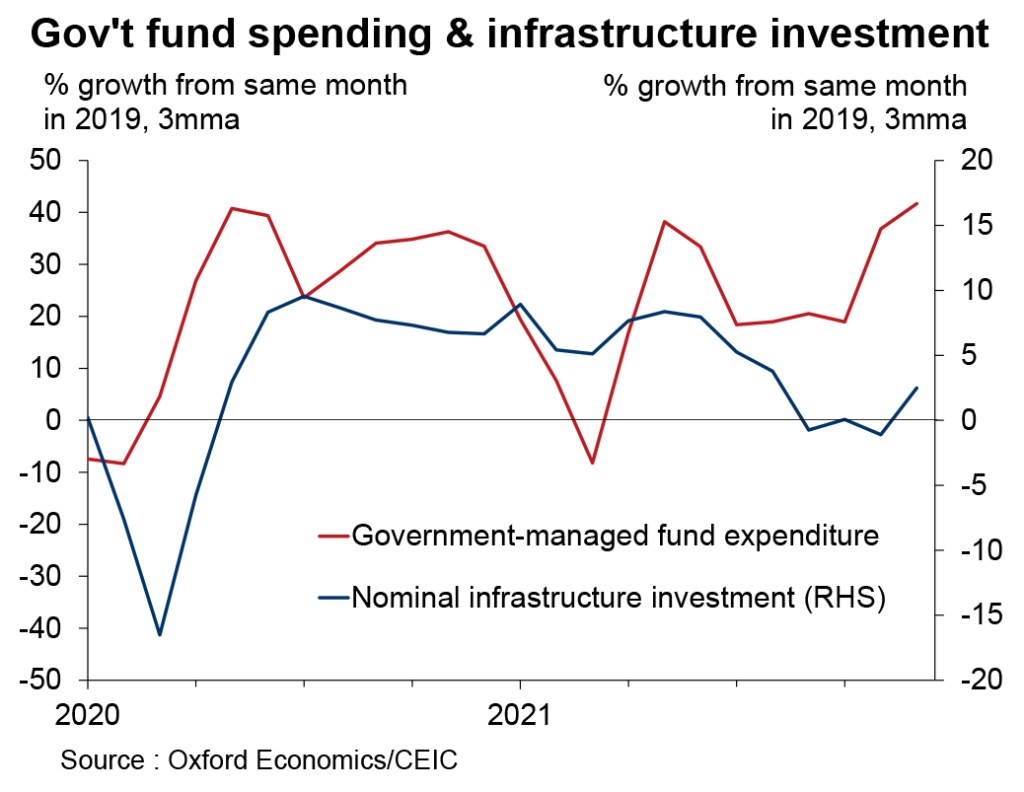 The recent lockdown in Baise has sparked fears over disruptions to aluminium supply in China, where this small city in Guangxi province bordering Vietnam accounts for 5%-6% of China’s aluminium production capacity. Reflecting that risk, aluminium futures prices on the Shanghai Futures Exchange spiked in early to mid-February. While the COVID outbreak in Baise has quickly been contained and this will prevent a severe disruption to aluminium supply from happening, the case illustrates how strict COVID restrictions and the possibility of prolonged outbreaks continue to pose challenges to production and shipment within China and slow the global supply-chain recovery.

That said, while past experience suggests that COVID restrictions could cause some disruption to local supply chains and delays in exports of different products, the challenges do not appear to have had a significant impact in aggregate, as illustrated by robust exports in 2021: Goods exports in volume grew 8.2% in the second half and 17.2% for the full year. Moreover, while production momentum in industry has weakened since May, raw material inventories have held broadly steady (Exhibit 6). This suggests production isn’t being held back by tight supplies of inputs, and that the slowdown in industry is more a demand issue than one of supply.

Exhibit 6: Slowdown in production is mainly due to demand weakness, rather than a supply issue 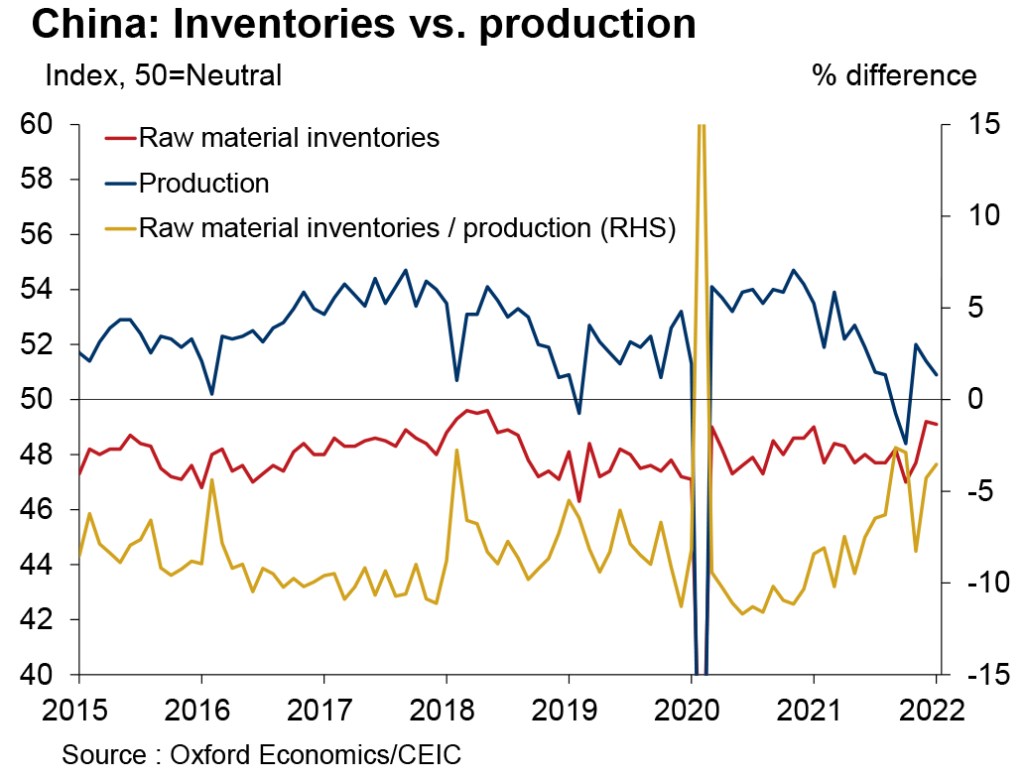 Downside risk to our growth forecast

We forecast Q1 2022 GDP will grow 0.2% quarter-on-quarter, down from an average of 1.1% in the second half of 2021. For 2022 as a whole, we forecast GDP to expand 5%. We expect corporate and infrastructure investment will be key growth drivers this year, while household consumption and real estate investment will remain weak, especially in the first half. Following an exceptional 2021, we expect export growth to slow as global growth moderates. In fact, we have recently lowered our world GDP growth forecast for this year as recovery remains volatile due to new COVID troubles affecting Q1 activity.

We anticipate Chinese policymakers will continue to roll out meaningful and front-loaded policy support to shore up growth, but the risks to our forecasts are skewed to the downside. While new COVID cases have now declined to levels after a wave of outbreak between December and mid-January, the potential for more severe and frequent outbreaks remains a key risk. Meanwhile, policy easing may not be enough to contain the real estate downturn, especially in the first half of the year. 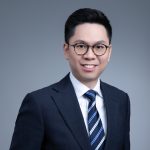