Singapore issued four digital banking licenses earlier this month, and other countries in Southeast Asia are expected to follow suit. Photo by Shutterstock.

It marked the culmination of a process that drew keen interest not just from financial or technology companies, but businesses from across different sectors.

Following in the footsteps of Singapore, Malaysia and the Philippines are also looking to permit digital banking. In many ways, this is the natural evolution in the development of the fintech space across Southeast Asia, which has accelerated owing to the COVID-19 pandemic.

While banking penetration in Singapore is deep, the ASEAN region is home to almost 300 million unbanked people. Developments in financial technology augur well for the region as they have the potential to enhance financial inclusion and to provide much needed funding for the region’s many small and medium enterprises.

A recent report by the Singapore Fintech Association highlights a steady growth of digital banks globally over the past decade. Between 2010 and H1 2020, the number of digital challenger banks has grown at a CAGR of 27%, largely on account of the growing shift towards smartphones and internet usage.

Digital or online banking have also evoked interest among incumbent banks, who are increasingly investing in emerging technologies to cater to a consumer base that demands greater digitalisation.

Exhibit 1: The number of digital challenger banks has increased rapidly

Southeast Asia is increasingly being seen as a fintech hub. A large part of the funding coming into the region’s fintech sector is being directed towards the payments and lending segments. The level of funding has grown at a CAGR of 55% between 2016 and H1 2020, outpacing growth in other parts of the region such as East Asia and South Asia, which themselves have seen strong CAGRs of 39% and 37% in this period respectively.

Incumbent banks in the region—as elsewhere—are faced with legacy issues and have been slow to react to shifts in customer preferences, advances in technology and regulatory developments. In the meanwhile, newer players are making their presence felt across a variety of financial services. Partnerships between fintechs and incumbent banks are also being seen.

Recent developments in the region’s digital banking licencing frameworks bear testimony to the strong shift towards new banking trends powered by digitalisation. Importantly, they demonstrate government interest in this space.

Additionally, Southeast Asia is home to several superapps and tech giants with financial services capabilities. As a result, much of the region’s population is accustomed to accessing at least a few financial services digitally, creating a conducive environment for digital challenger banks.

Separately, the region is expected to continue witnessing strong economic growth over the next decade. By 2030, the GDP of the ASEAN-5 (Singapore, Malaysia, Thailand, Indonesia and Vietnam) is projected to grow to $4.3 trillion and its population to 540 million.

Regulators in the region are actively supporting digital transformation across industries. Efforts are underway to support innovation using emerging technologies. In many of the region’s economies, regulatory sandboxes have been set up to trial the provision of services in a controlled environment.

Bank Indonesia introduced a regulatory sandbox framework in 2017. It is also scheduled to launch e-KYC and open banking capabilities by 2025. Meanwhile, Malaysia and Singapore are the only two Southeast Asian countries to issue guidelines governing e-money, open banking and e-KYC. However, others in the region are also instituting policies to encourage fintech growth.

Exhibit 3: High level of activity in digital-related regulations in Southeast Asia, paving the way for innovators and new market entrants 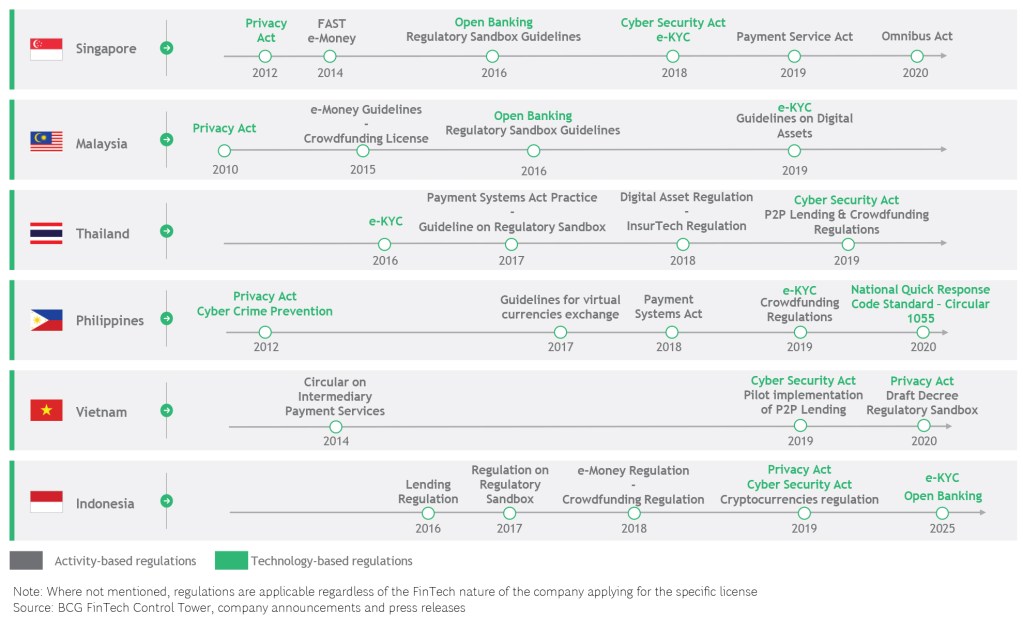 Singapore leads from the front

Separately, many incumbent banks in Singapore have already invested heavily in digital banking capabilities to cater to increasingly digitally savvy customers. They continue to do so, in preparation of competition expected from the new digital banks that are being set up from scratch, with no legacy infrastructure holding them back.

Eventually, digital banking will need to be profitable. It will need to focus on driving revenue quickly to offset the high rates of cash burn that is typical in this sector. Digital banks must also ensure they adopt a quick-to-market approach with new offerings that address customers’ unmet needs.

In many ways Southeast Asia is at the forefront of developments in the fintech sector. Digital banking is the next frontier. How the region’s new banks will fare will impact the region’s financial sector, and more importantly, have broader implications on the region’s socio-economy.